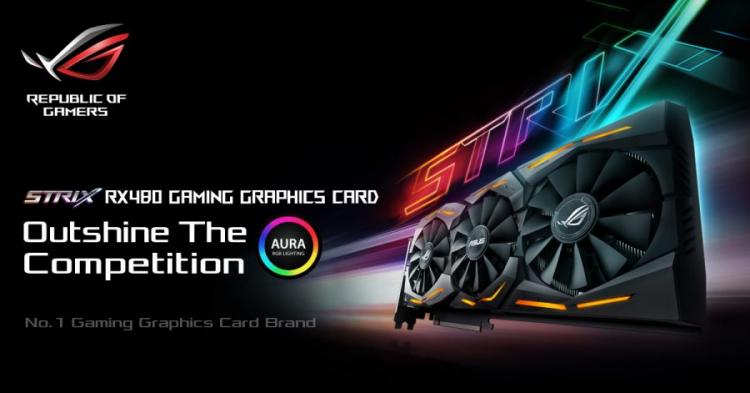 There has been a lot of talk about the AIB versions of the RX 480, but little to no concrete information. That all changed today when the ROG division of ASUS announced the ROG Strix RX 480. This factory overclocked beast of a card features ASUSs new DirectCU III cooler with the Aura RBG lighting system, making it a truly top end AMD offering.

Though there was no mention of what PCI power connectors would be on the board, its clear that the ROG Strix RX 480 was designed for overclocking. The card comes with a factory boost clock of 1310MHz in gaming mode, and jumps to 1330MHz in overclocking mode. It seems like the card may be able to go even further, but 1300MHz+ is a pretty great start.

The DirectCU III looks quite impressive. ASUS has installed three of its custom wing-blade fans into the cooler, claiming to deliver an additional thirty percent cooling performance over the stock cooling solution. Not only that, but ASUS also claims quieter operation than stock. With three fans, thats a fairly lofty claim. ASUS has also done something innovative with the cooling design of the ROG Strix RX 480. They included two PWM fan headers on the card so that it could be connected to and control system fans. This allows for system fans to respond to the increasing temperature of a GPU under heavy load instead of just the CPU. The DirectCU III also comes with built in RGB LEDs that can be controlled via ASUSs driver software for an added element of customization.

On the topic of drivers, the card will utilize ASUSs GPU Tweak II software with both simple and in-depth overclocking utilities. The drivers also include a license for XSplit Gamecaster for easy streaming.

No mention of the price was made, and only a vague August release date was given.