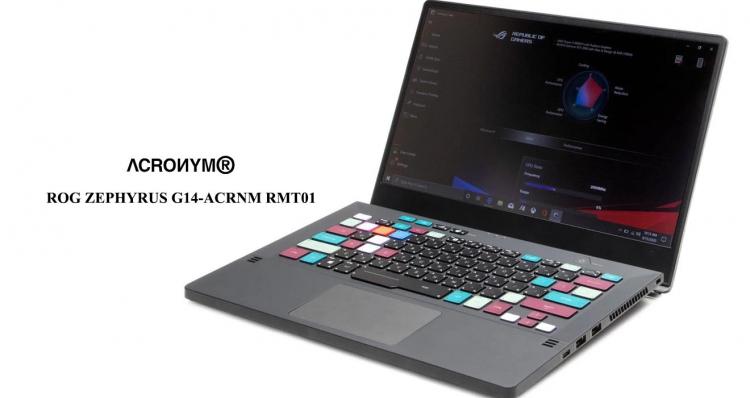 
The world's most powerful 14-inch gaming laptop has been radically retooled by ACRONYM to expand the definition of a gaming laptop. In collaborative design with David Rudnick, the ZEPHYRUS G14ACRNM (RMT01) uses magnesium and aluminium alloys, custom machining, precision etchings, specially developed paints, and two completely original typefaces: details that reinforce the notion of technical craftsmanship. While its carbon black surface is sleek enough to blend into any environment, a closer look reveals striking touches, schematic markings, and iconography that invite curiosity.

With an 8-core AMD Ryzen 9 CPU and RTX graphics, the RMT01 is not only built for the most dedicated gamers, but uniquely tailored to the specs of the next generation of creative professionals. AniMe Matrix is also equipped with eight custom-designed animations exclusive to RMT01.

Every point of contact is addressed between user and machine. Device packaging is designed to follow through on the philosophy of sustainability and functionality. Everything from the box to the Airpak sleeve is built to be reusable and recyclable. The ZEPHYRUS G14ACRNM marks the first step towards a radical new vision of what users' experience of what hardware and personal devices can be.

To Learn more about the ROG ZEPHYRUS G14ACRNM, visit ROG.ASUS.com.