The sheer breadth of motherboard selection has, for some considerable time, been quite bewildering in the PC market. Every major manufacturer launched with entry-level, mainstream, workstation, gaming, essential, premium and overclocking designs, each encompassing multiple discrete SKUs denoting various feature sets. Even that simplification doesn't take into account different chipsets, such as Intel's Bx50 and Hx10 series. Simply navigating this landscape can seem like a minefield even for the canny enthusiast.

Thankfully ASUS has revealed that they're planning on more clearly delineating their lineup, making branding distinctions far clearer. Hopefully users will soon be able to tell the segment and product capabilities at a glance, to a useful degree of accuracy, rather than needing to delve too deeply into the mire of technical specifications. 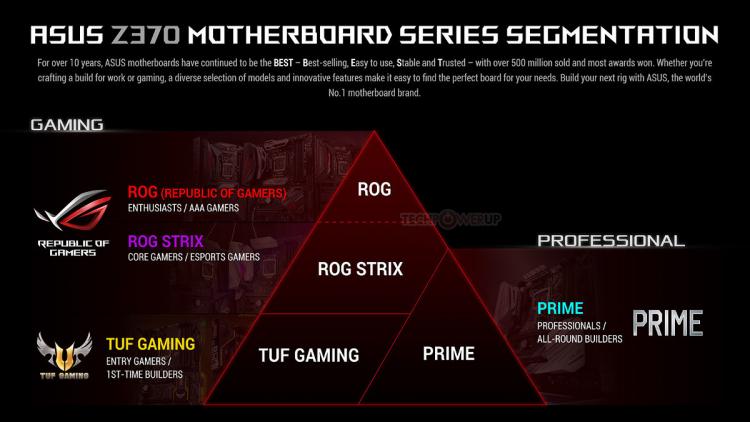 Sitting at the bottom of the new triangular (or pyramid, if you prefer) organisation are the TUF and Prime brands, where previously they will have spanned the entire feature set present in ASUS's motherboard range. Looming over the weaker siblings is the Republic of Gamers lineup, split between ROG STRIX and full-fat ROG SKUs.

In a previous life ASUS TUF motherboards were more rugged designs built to a more exacting standard, but those standards have gradually been incorporated across the ASUS range. Now the brand is being repurposed as entry-level for beginner system builders on a budget, as well as gamers looking for a bare minimum of features to keep costs down. Perhaps the saddest loss are the all-white TUF Sabretooth models, which may not fit in with ASUS' new ethos (though we can but hope).

Prime motherboards have themselves been an interesting range over the years. They have at times ran the gamut of SKUs from complete entry-level all the way up to the enthusiast-favourite and feature-rich Deluxe models, and have often been the choice of consumers tired of the more gaudy aspects of 'enthusiast' designs. Now however it appears that the Prime range will dispense with the Deluxe versions, instead offering plain aesthetics up to models that are quite feature-rich, AKA the mid-range. 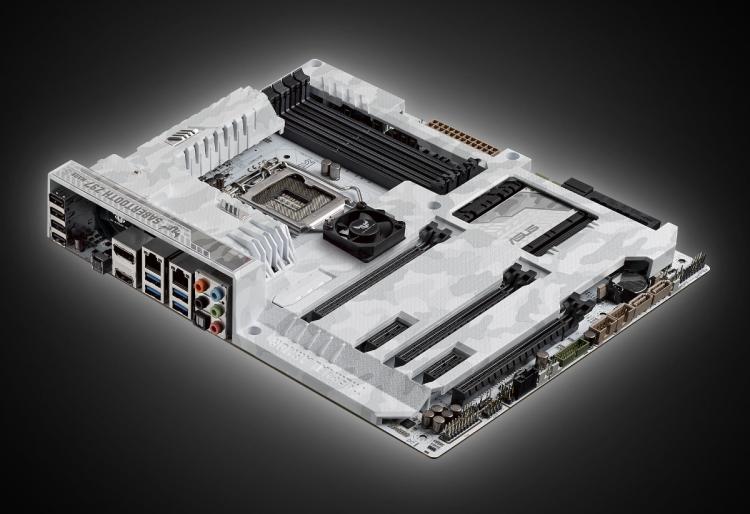 Not more all-white TUF Sabertooth models? That would be a shame

ROG Strix motherboards will be all about continuing their unique branding through to the motherboard range. Targeting gamers who need a little more than TUF models can offer, whilst not quite the budget-busting features of the enthusiast ROG range, Strix is perhaps going to be the choice for mainstream PC gamers seeking a variety of form factors. The brand will feature Strix-E (top-end), F (mid-range), G (mATX), H (entry-level ATX) and Strix-I (mini-ITX) SKUs, so there will still be plenty of choice.

So, for example - the ASUS ROG Zenith X399 Extreme would be a very high end X399 design for enthusiasts and overclockers, whereas the ASUS ROG Strix-I Z370 would be a mini-ITX motherboard for Coffee Lake.

It will be interesting to see which of the new options resonates particularly with consumers, and whether the TUF range in particular can service a large enough niche. One consumer group potentially under-served will be those looking for high-end features but with a more modest aesthetic not offered by ASUS gaming boards, who until now may have choice Prime (esp. Prime Deluxe) models.

Given that the motherboard landscape from all the major manufacturers is mind-bogglingly broad, it will be interesting to see if other manufacturers follow-suit.