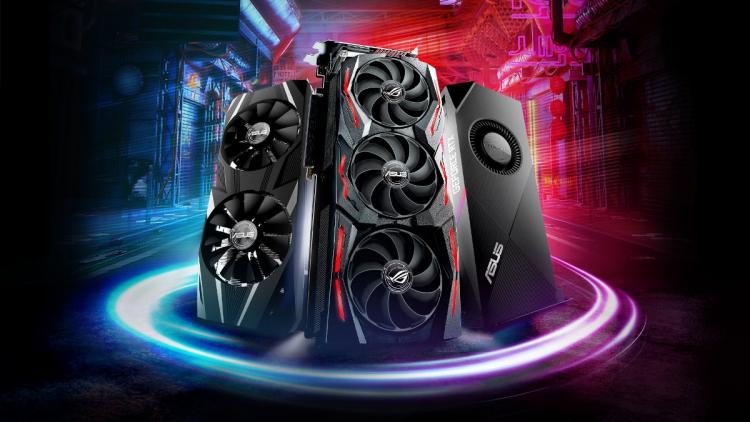 With the NVIDIA GeForce RTX 2080 barely out the door, and RTX 2080 Ti due in the hands of gamers worldwide imminently, you might be forgiven for thinking that graphics card manufacturers are going to pause for a bit of a breather. However, at least in the case of component giant ASUS, that doesn't appear to be so. Republic of Gamers, the performance the Taiwanese corp, this weekend took to the internet to tease their upcoming GeForce RTX 2070.

Featuring the younger sibling of NVIDIA's Turing architecture-based GPU range, the RTX 2070 is believed to be the entry-level point for bringing NVIDIA RTX technology into your gaming life. At its heart is a full-fat version of NVIDIA's TU106, a slimmed-down chip smaller in size and lower in capability than both the 2080Ti's TU102 and 2080's TU104. There may or may not be a Founder's Edition of the RTX 2070, but from the looks of things ASUS are raring to go with card models featuring their own premium cooling solutions.

More Strix at the High-End 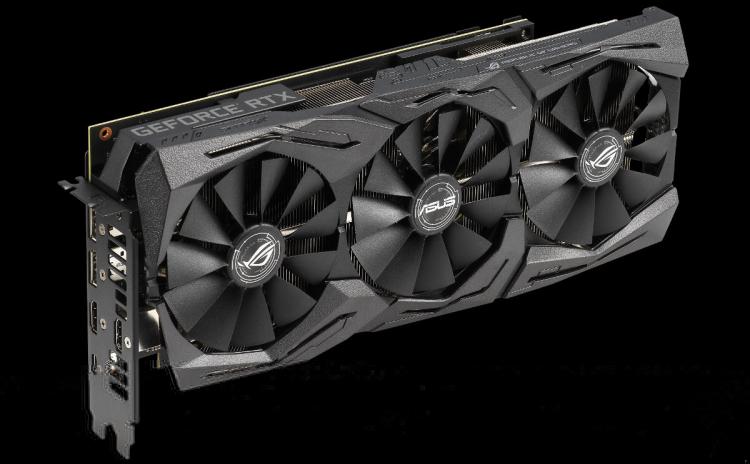 Billed as 'the Best of RTX' is the ROG STRIX GeForce RTX 2070 variant. The card's custom PCB is manufactured with their Auto Extreme Technology, helping them maintain high levels of quality assurance. However that important titbit is likely to be overshadowed by the rest of the features such as metal front-plate and backplate, 6-heatpipe heatsink, triple-axial fan and configurable RGB lighting trim.

Front and back-plates maintain the card's rigidity despite a very weighty heatsink. This also helps the implementation of ASUS Max Contact feature, which uses precision machining to ensure a perfect contact between GPU die and heatsink. A good start, but ASUS go further. 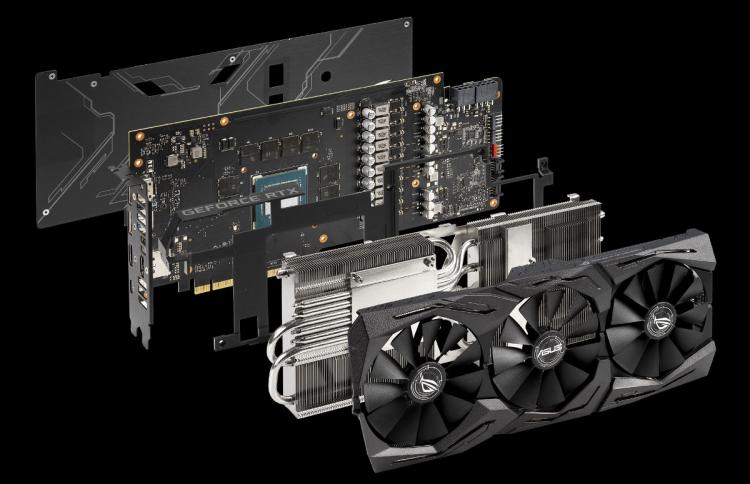 The heatsink is a larger than standard 2.5-slot height, increasing the surface-area of the heatsink fins. As a result the card can operate longer in 0db mode, with the fans only kicking in once the GPU hits 55C. Plus, another neat feature is the inclusion of two 4-pin fan headers on the graphics card for case fans which can be tuned to the GPU temperature through bundled software if required. Quite an intriguing addition if you eventually try to water-cool the card too.

The card is powered by one 6-pin and one 8-pin PCI-e power connector, and hence will have overhead for overclocking. Display outputs meanwhile are non-standard for NVIDIA's RTX-series: two HDMI 2.0a, two DisplayPorts 1.4a and one VirtualLink USB Type-C connector for next-gen VR HMDs and USB 3.1 Type-C Gen 2 devices.

Into the mainstream - The ASUS Turbo RTX 2070

The ASUS Turbo RTX 2070 will be the most affordable RTX card in ASUS's range at launch. Incorporating a more compact 'blower' cooler with single radial fan, the card ticks the most boxes if you're install an RTX 2070 into a relatively compact chassis. The cooler is restricted to dual-slot height, and ASUS have increased the fan diameter to 80mm to both increase air flow and reduce the noise generated.

A re-engineered rear exhaust has meant that ASUS are a little more frugal with display outputs compared to the rest of the range. Just a single HDMI 2.0 and two DisplayPort 1.4a ports are present, alongside the VirtualLink connector.

Doubling up with the ASUS Dual

Serving as something of a comfortable middle-ground between the Turbo and ROG Strix models is the ASUS Dual GeForce RTX 2070. The difference to the Strix is clear - fan count has been reduced by one, while the card itself is slightly thicker at 2.7 slots rather than 2.5. According to ASUS this means that the heatsink has over 50% more fin surface area than last-generation's Cerberus. Of course, you will need to ensure that your particular system can accommodate such a beefy design, but most ATX systems with only one PCI card (the GPU) shouldn't have too many issues.

All of these ASUS GeForce RTX 2070 graphics cards will be available at some point in October, with exact date and pricing still to be announced. During the GamesCom unveiling of the RTX 20-series NVIDIA stated that the RTX 2070 will be priced from $499, so expect them to arrived north of that price point unless something major changes. All will have the following base specs, and could vary according to the factory overclock applied: