👤by Tim Harmer  Comments 📅06.09.2018 13:01:01
AMD's position in the mainstream CPU market continues to improve following the release of Ryzen's 2nd generation CPUs, so it's high time they turned their attention to two segments which have yet to be addressed by their 2018 lineup. Today's débutantes feature the welcome return of the Athlon brand at the entry-level point, and the refresh of their PRO Business/Enterprise range to incorporate the latest Zen+ features. 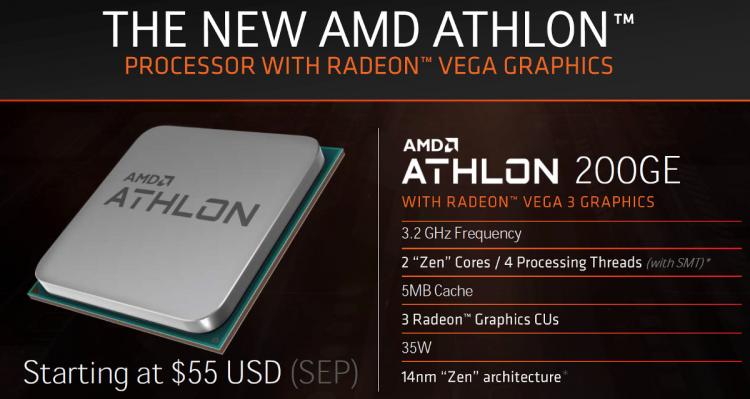 For 20 years Athlon CPUs have been a mainstay of AMD's consumer CPU and APU lineup. Starting out as performance-oriented chips, Athlon now forms the basis of AMD's entry-level/everyday CPU lineup. Systems in this category need solid performance from a cool (and hence quiet) CPU across a wide variety of applications, and crucially they must come in at a low price point. So, how does the Athlon 200GE faire?

The new SKU is derived from the same Raven Ridge architecture as AMD's current APU lineup, and are compatible with current and future AM4 motherboards (although some may require a BIOS update, to be clear). The die is comprised of a dual-core CPU that supports Simultaneous Multithreading (SMT) for up to four independent threads, and a Vega-class GPU with three Compute Units. Clocked at 3.2GHz, the APU eschews aggressive turbo features such as Precision Boost and XFR to maintain a 35W TDP envelope. Still, performance should be nothing to be sneezed at.

Pricing the chip at an MSRP of $55, AMD are squaring up to Intel's Pentium G4560 (based on the Kaby Lake architecture). Its competitor is also a dual-core, four-thread CPU, but this design is clocked at 3.5GHz and features Intel's HD Graphics 610. Surpassing it is not a trivial matter for the 200GE. 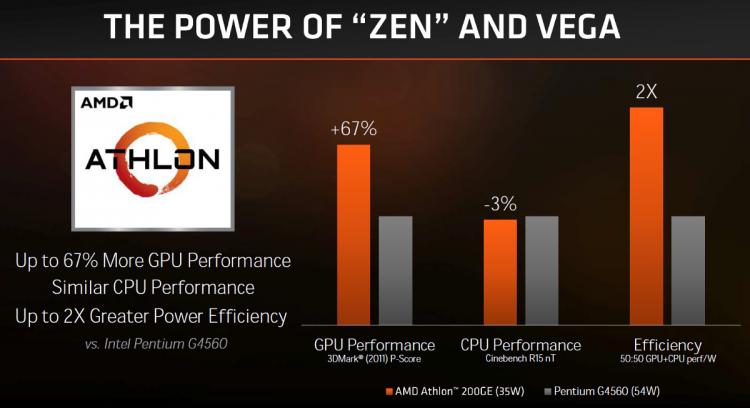 Nonetheless, AMD are bullish about their chances. While raw CPU performance is expected to be broadly similar, efficiency should be far better due to the G4560's 54W TDP. And of course those three Vega Compute Units will result in vastly improved integrated graphics performance - potentially as much as 67% over their competitor. The integrated graphics hardware is solid enough that AMD believe entry-level gaming at 720p in very popular titles - League of Legends, Rocket League and Overwatch to name but three - are reasonable aspirations.

It's also noteworthy that the 200GE is a massive step up from the Athlon model it supersedes, the A6-9500E. That's especially the case on the CPU side of things, where AMD project as much as a 100% improvement over the previous generation (which, at its core, was based on the now-obsolete Bulldozer architecture).

The Athlon 200GE also re-introduces Radeon FreeSync into the entry-level segment at a time when FreeSync monitors have never been more affordable. Matching an APU capable of consistent 30-60 fps gameplay with a variable refresh rate monitor provides a surprisingly good experience which for many is more impactful than introducing VRR technology into 60fps+ ecosystems. 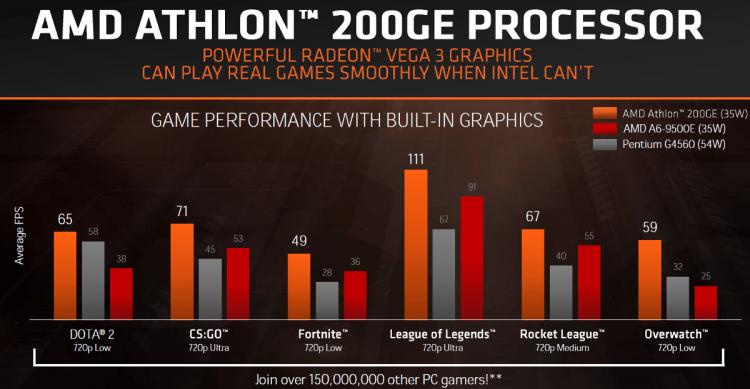 For more gaming heft, the APU can be paired with an appropriate discrete GPU. Here performance is typically more constrained by CPU capabilities, and yet AMD still believe that their performance will be close to the G4560 despite the tighter TDP limitations of their chip. Furthermore, they project it will even surpass their own A10-9700, a 65W model from the prior generation. Not bad.

Priced at an MSRP of $55 excl. tax, it compares well with the G4560 which has a street price of $68.99. It will not however phase out the majority of the Athlon X4 and A-Series APUs, which will remain in the product stack for a little while longer. But perhaps most importantly, the Athlon 200GE should be a solid alternative for everyday/entry level computing in the home and at small businesses.

The Athlon 200GE will be available from September 18th, plus AMD are also planning 220GE and 240GE models for release in Q4. The specifications of those APUs will be unveiled at a later date.

Launching alongside the consumer-class Athlon 200GE are a new series of CPUs for the Ryzen PRO lineup. Commercial-class variants of existing 2000-series CPUs, they supplant the prior generation with up to 16% better multi-threaded performance and a wider selection of features. These CPUs will sit above existing Ryzen PRO 2000-series APUs in the product stack, and are oriented more towards the power-user in need of strong multi-threaded performance coupled to a discrete graphics adapter.

At the top is the familiar sight of the PRO 2700X, a model that is very similar to the vanilla Ryzen 7 2700X. This 8-core/16-thread brute is based on the Zen+ architecture with 12nm process node, and is capable of up to 4.1GHz core clock speed within a 95W TDP envelope. 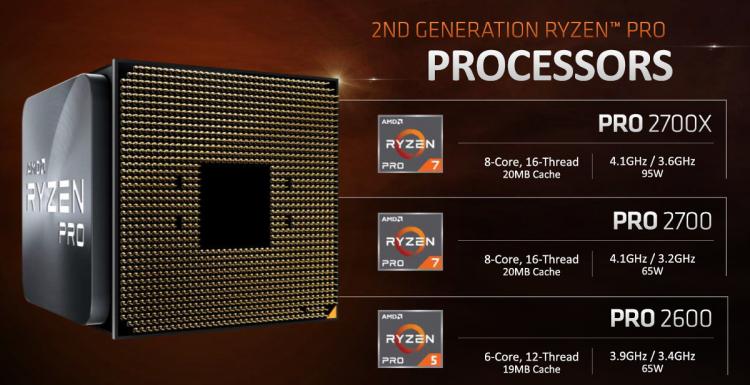 Similarly, the PRO 2700 is a 8-core, 16-thread CPU, however this design does not clock nearly as aggressively. A base clock speed of 3.2 GHz is boosted within a more narrow 65W TDP envelope, so while it has the same 4.1GHz maximum that should be reached less often and held for shorter time periods.

Compared with their Ryzen PRO 1000-series counterparts, AMD project a performance uplift of between 10 and 17% in the new 2000-series CPUs. AMD feel that their performance advantage versus Intel in workhorse multhreaded scenarios combines well with on-par performance in general office productivity tasks to make this CPU range particularly attractive to businesses. Also launched today is the Athlon PRO 200GE, a commercial-grade variant of the Athlon 200GE detailed above.

The Ryzen PRO lineup features Precision Boost 2 and XFR2, inherited from consumer Ryzen refresh CPU, which will require compatible 400-series motherboards to exploit fully. Unique to the PRO series however is the inclusion of AMD's on-chip co-processor which offers security at the silicon level. Operating under the umbrella of AMD Secre Technologies, the co-processor along with other architectural features bring support for built-in AES 128-bit encryption, Windows 10 Enterprise Security and Memory Encryption.

By offering these PRO features down the product stack, AMD draws a sharp distinction between their lineup and Intel's spotty support for vPro manageability and security features. Typically these are not offered on low-tier CPUs, whereas similar features are standard across AMD's entire Ryzen PRO and Athlon PRO lineup.

AMD's final trump card is their position in terms of reliability. Twenty-four months of planned processor availability makes sourcing in-place replacement of parts straightforward, while a 36-month warranty is far higher than than consumer equivalent. Furthermore, silicon wafers are binned in such a way that PRO CPUs come from the very best parts AMD have to offer. 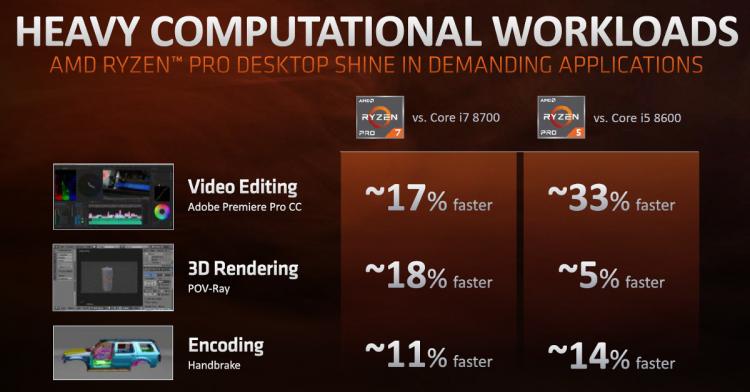 OEMs should be incorporating new Ryzen PRO CPUs and APUs into business and enterprise-class designs for large commercial entities in the very near future. As always, for more information on these and other new developments from AMD, visit AMD.com.

There are currently 725 user(s) online:
Google