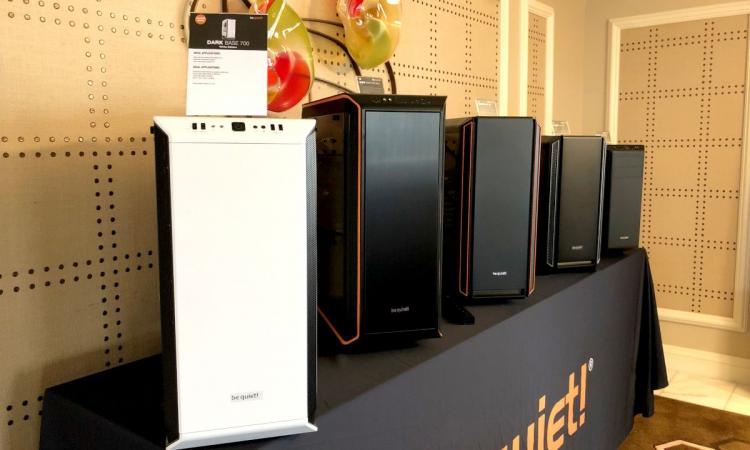 Be Quiet's product showcases at PC technology events are a small treat in the wider technological feast, and as such it's never dull to see what they'll be offering to consumers in the not too distant future. At CES this week they were keeping their 2019 cards close to their chest, but nonetheless shared a brief taste of upcoming products that will be available in the very near future. 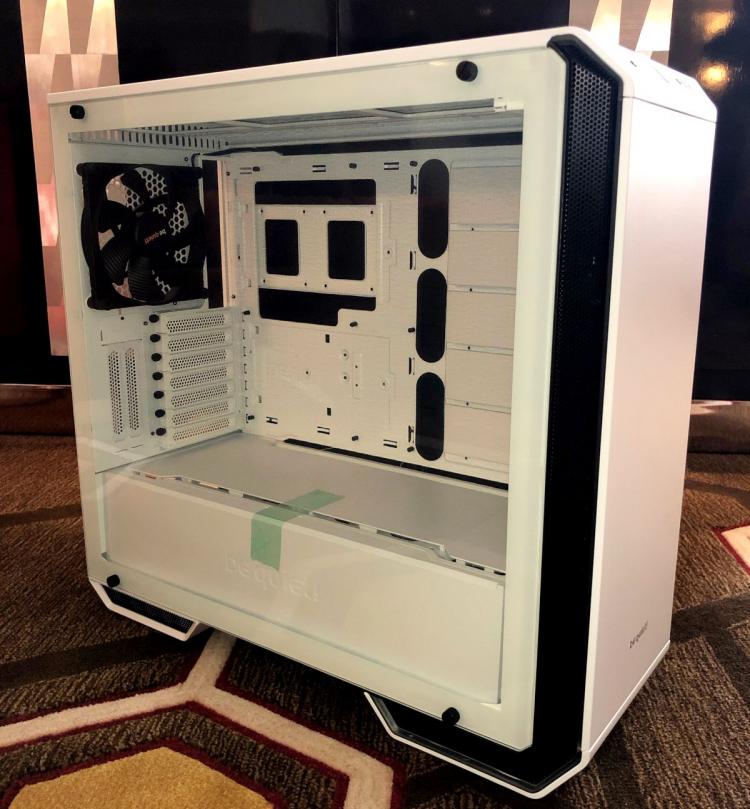 To start, lets take a quick look at a new Limited Edition full tower chassis coming next month, the Dark Base 700 White Edition. No surprises for guessing that the underlying design is based on the well respected be quiet! mainstay, but this variant is sure to catch the eye as an enclosure for a centrepiece high performance system. Only 3000 will be made and distributed worldwide, and expect demand amongst enthusiasts to be fierce indeed.

Read our review of the Dark Base 700 here!

In the main technical details remain unchanged from the standard Dark Base 700, following the truism of 'if it isn't broke, don't fix it.' The chassis is primarily of steel construction to give an extremely solid body, while a tempered glass side panel will offer a window for the components inside. The demo model made use of a clear side panel, and a rubber seal serves to dampen any vibration running through the chassis to it. An RGB lighting accent, complete with controller module, offers a little bit of customisable trim to the front panel; and these LEDs can be controlled via most current motherboards too.

The Dark Base 700's party-trick however is its invertable E-ATX motherboard mounting system, taking advantage of a flexible modular nature in its underlying design. As a result the motherboard can be mounted normally or upside-down, and the side panels can switch positions to reflect the new motherboard orientation (and continue to display internal components). Indeed, the system is so flexible that you can in a pinch remove the motherboard tray to use as a bench table, no longer requiring that you install the motherboard and cooler in situ or perform a complicated dance to manoeuvre an installed motherboard & cooler configuration into place. 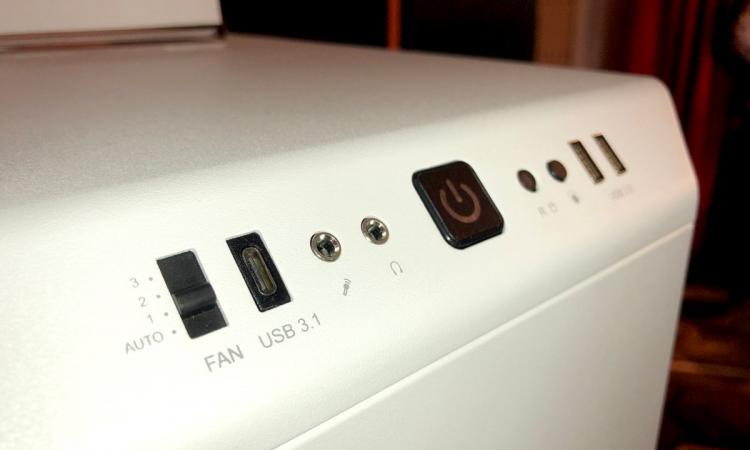 In the top a removable fan bracket eases installation of both fans and radiators up to 360mm. On the floor, the PSU is covered by a white shroud that also hides cables and aids with cable management. In common with some other high-end PC chassis, dual-slot GPUs can be mounted vertically rather than horizontally, although this will require the use of a riser cable and mounting system (sold separately).

The modular design also extends to the HDDs, where up to seven cages can be optionally installed or blanked off as required. And for ease of use, the motherboard tray is decoupled from the HDD mounting positions. Noise-dampening too also gets a nod as each HDD mount is isolated and panelling integrates noise-cancelling material.

Finally, the front panel I/O is well equipped with a USB 3.1 Gen 2 Type C port alongside standard USB 3.0 ports, headphone and microphone ports, and the integrated fan speed selector. The last touch is an adhesive-backed brushed aluminium plate detailing the case's unique unit number, which you can mount where-ever you desire. 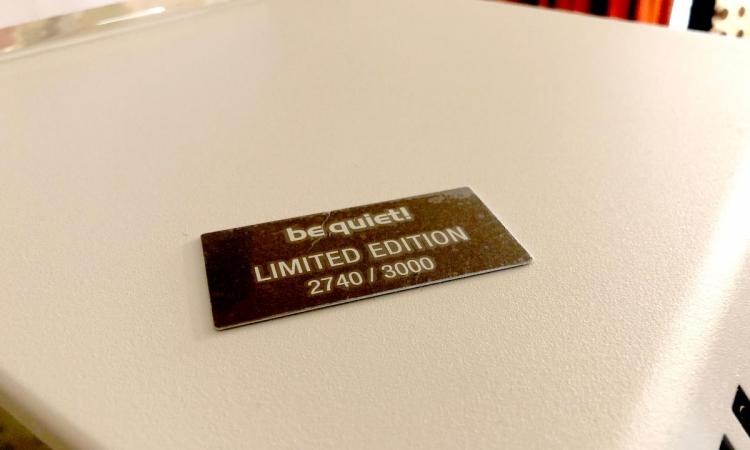 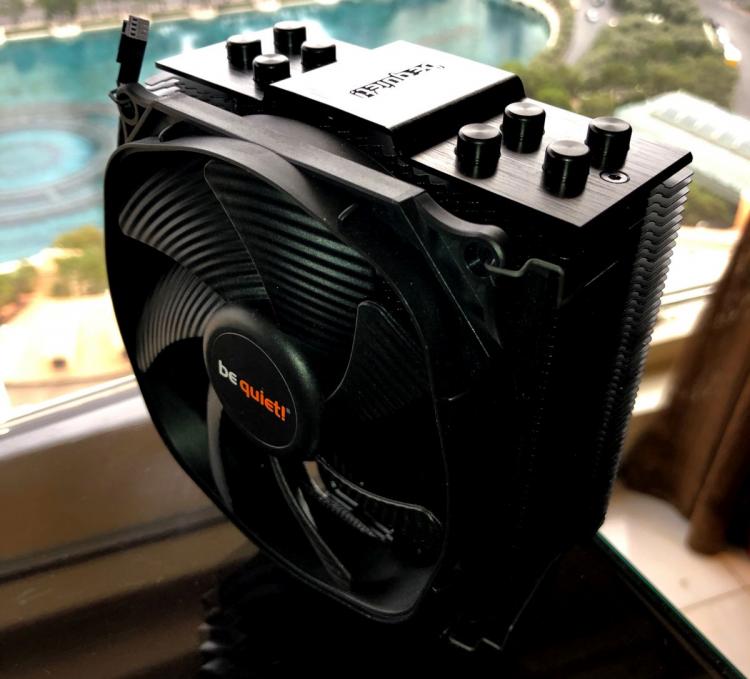 If you're opting for monochrome internals with very tidy finishes, but your cooling requirements aren't astronomical, you might be interested in the Dark Rock Slim CPU cooler. Aesthetically similar to the latest generation of Dark Rock coolers, complete with black anodised aluminium fins and an aluminium top plate, it cuts an elegant and slightly more discreet figure compared to its more bulky siblings. Be quiet! hope that the design will accentuate your internal aesthetic choices such as tall RGB RAM, rather than obstruct or overshadow them.

The cooler is rated up to 180W, making it suitable for a good overclock on modern mainstream CPUs such as the AMD Ryzen 7 series or Intel Core i9's. It's equipped with a Silent Wings 3 120mm PWM fan, which as the name suggests is optimised for silence without unduly skimping on air-flow.

Small touches help to maximise cooling in the Dark Rock range, aspects that the Slim design inherits. Four heatpipes draw heat away from the baseplate, while each aluminium fin has a ceramic particle coating that aids in heat transfer. Four small dots are also placed on each fin to slightly increase surface area in critical air-flow zones.

Mounting the cooler follows be quiet's typically hassle-free top mounting system, and if you're so moved you can also install a second 120mm fan to increase air flow (or maintain air flow at lower RPM levels).

Unfortunately the wait for availability will be a protracted one. The Dark Rock Slim isn't due at retailers until Q2 2019, with a TBD price in the ballpark of 50/$50. 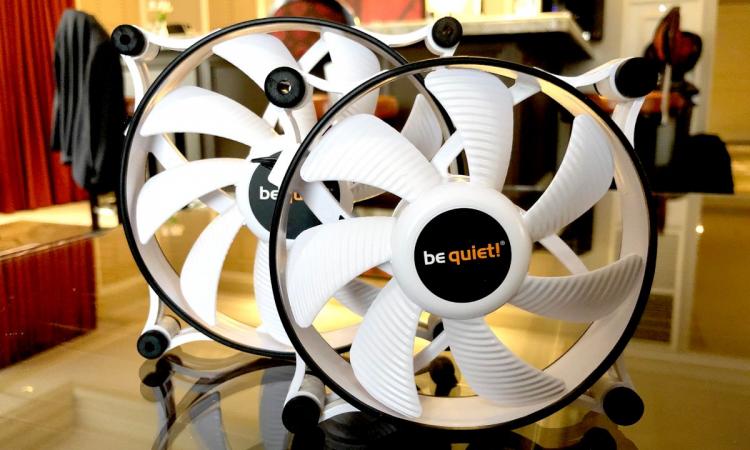 While their name might not be the most recognisable, be quiet are also one of the highest regarded in their fan product range. Models have been released to suite a range of requirements, and two specific variants are set to be updated in the early part of 2019.

The first is their Shadow Wings series, now in its second generation. The core design calls for low-RPM operation for low system noise, with near-silent operation at 900RPM as a 140mm fan or 1100RPM as a 120mm model. A configuration that's as silent as possible is the aim, rather than one which prioritises cooling over all else.

Aiding this endeavour is a decoupled mounting system that uses push-pins, a rubber frame and rubber mounts to acoustically isolate the fan from other components including large chassis panels. A high-grade rifle bearing extends the fan's expected lifespan up to 80,000 hours.

Also scheduled for an update in 2019 is the be quiet! Pure Wings range. These fans are optimised for their core audience who require high performance at a cost that is far from extravagant. Pure Wings models are ubiquitous across be quiet's product range due to regular inclusion in their chassis and cooler retail products.

As always, more information on the entirety of the be quiet! product portfolio can be found at BeQuiet.com.