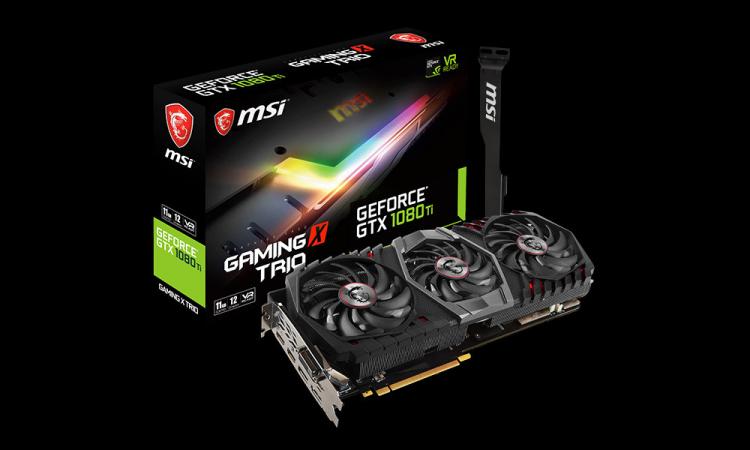 MSI have just taken the wraps off their latest high-end graphics card, and it's definitely one to open a few eyes. The GeForce® GTX 1080 Ti GAMING X TRIO is likely to be the flagship model in the MSI GeForce 10-series 'GAMING' range going forward, and provides a distinctly different set of aesthetics to the dual-fan non-TRIO GAMING range that the GTX 1080 Ti launched with earlier this year. Gone is the scarlet and black shroud livery, instead we see a thoroughly modern black and grey design with triple-fan cooling. However, that is just scratching the surface.

According to MSI's product gallery the GeForce GTX 1080 Ti GAMING TRIO cards will come in two performance SKUs - non-X, with three difference performance presets; and GAMING X, also with three presets but clocked to a higher level. Both designs incorporate an improved TRI-FROZR triple-fan cooler with two meaty 8mm diameter 'SuperPipe' heatpipes which in total is rated to dissipate a total 300W of heat. MSI have once more utilised their TORX fans for this card, two of which are 10cm while the remain centre fan is 9cm in diameter.

If you're worried about the weight of this cooling solution, fear not - MSI bundle a support bracket with the retail product to reduce graphics card sag.

What is a graphics cards in 2017 without a touch of RGB lighting? Also incorporated into the GAMING TRIO range is support for MSI's Mystic Light RGB LED lighting system, with LED accents in the shroud and aluminium backplate. This allows for control of the lighting through software, and synchronisation with supported lighting systems on other components such as the motherboard, fans and even peripherals. 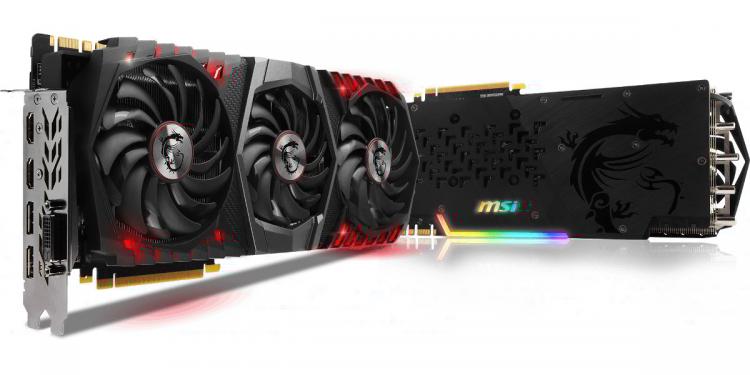 As with most of MSI's gaming lineup the new models are constructed using Military Class components. Quality and stability are watch-words here, and accordingly MSI have equipped the cards with Hi-C CAP cores, SFC, and Solid CAPs, as well as outsourced final validation to third-party laboratory testing 'according to military standards'.

Broadly speaking, MSI's GeForce GTX 1080 TI GAMING TRIO graphics cards mirror the technical specifications of the MSI GeForce GTX 1080 TI GAMING range (with TWIN-FROZR cooler), and will be sold alongside the longer-standing SKU. Three selectable core frequency modes - Silent, Gaming and OC - provide broad selection of performance window without too much tinkering. Nonetheless each card is also more than capable of overclocking, although perhaps to not quite the extent of the Lightning range (MSI's range tailored to enthusiasts and professional overclockers). 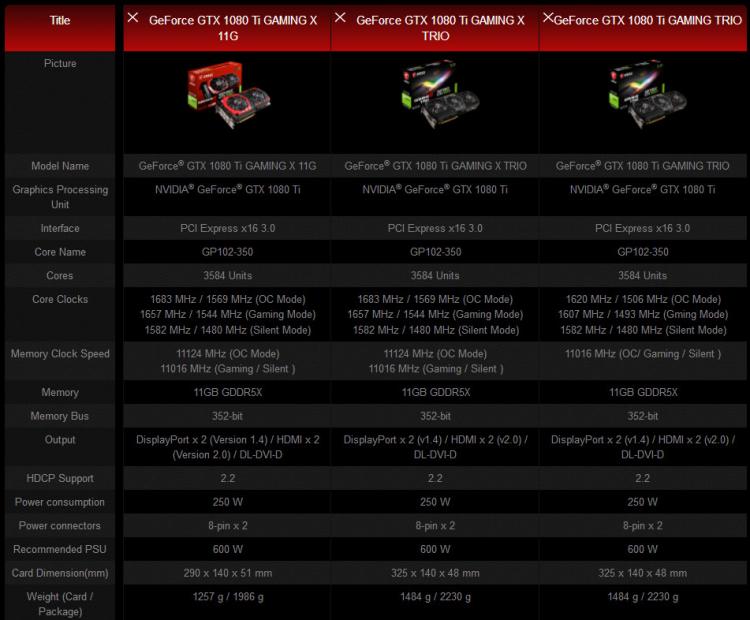 Clearly the cooling solution will change both acoustics and cooling performance, and that may or may not lead to better overclocking potential and noise levels compared to the dual-fan TWIN-FROZR cards. Reviews will no doubt determine where they eventually sit in MSI's Pantheon.

There are currently 818 user(s) online:
Google