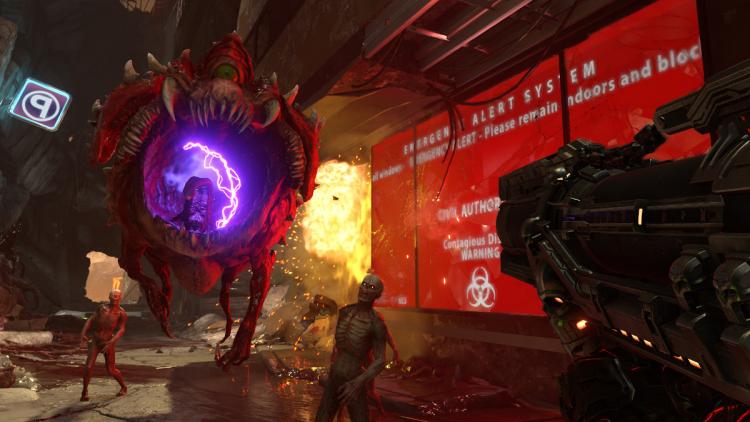 DOOM Eternal arrives on March 20th and so it's more than timely that Bethesda has shared the minimum and recommended specifications for the franchise's latest outing. Thankfully, unlike certain other first-person shooter publishers who will remain nameless, the breakdown of recommendations is detailed and hits all the relevant points in terms of player experience.

id Software's titles have always pushed the capabilities of PC hardware and API capabilities alike. It's not therefore unexpected to see 4K60 and 1440p120 fps on the list of capabilities, nor do the gargantuan requirements of an RTX 2080 Ti GPU come as much of a surprise; a Core i9-9900K or Ryzen 7 3700X are positively modest by comparison. A system with this level of hardware should be aiming for either of these resolution/fps settings alongside 'Ultra-Nightmare' image quality presets, made possible though the Vulkan graphics API.

Stepping down to 1440p60 is a major jump, taking things down more than a few notches in terms of hardware requirements. A good quad-core CPU and RTX 2060/Vega 56 GPU will be enough if you're content with merely High Quality presets and an RTX 2070 SUPER or RX 5700 XT will hopefully push 1440p144Hz.

At the base level the minimum PC specifications are very low, as befitting Low image quality presets: the game will run on mainstream quad-core Intel Core i5's/AMD Ryzen 3's and effectively require baseline GTX 10-series or 16-series GPUs. It's a testament to the longevity of AMD hardware that Radeon R9 280 and 290 are classed as up to the task alongside the RX 470.

The wide range of in-game settings and possible hardware combinations should reward experimentation for optimal setups, particularly if you're running an NVIDIA G-SYNC or AMD FreeSync panel.

DOOM Eternal will be available on Steam at launch next week. We will continue to recommend waiting until launch day reviews are out rather than opting for the £50 pre-purchase, even though id software titles on PC have an exceptionally good reputation.

There are currently 625 user(s) online:
Google