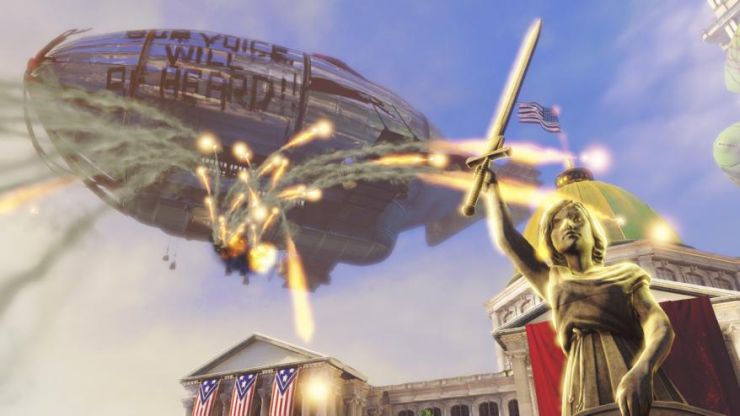 BioShock Infinite is due in a little over two months and Irrational Games have taken the opportunity to provide PC gamers with information on how the title has been adapted to the PC platform, as well as the minimum and recommended specs for the eagerly awaited next chapter in the franchise. Chris Kline, Technical Director at Irrational Games, took to the official blog seeking to dispel any latent worry that PC gamers would be getting the short end of the stick compared to their console counterparts.

When it comes to controls, the PC version has been adapted to the standards of keyboard/mouse gameplay. Functionality to fully rebind keys from their defaults - a clear lack in many AAA titles ported from the console - will be included, as will advanced mouse configuration and an engine with no inbuilt mouse smoothing. PC gamers who wish to play on a gamepad instead may do so, with a number of preset controller configuration options available. A pretty good start.

BioShock Infinite is, you're proudly told, a DirectX 11 game which will take advantage of many DX11 specific features. Even so, a DX10-compatible card is all you will need to play the game, though you may need to choose carefully between one of the six available quality presets or use custom settings to optimise performance. Irrational will be supporting greater than widescreen resolutions for a wider view of the scene, including both AMD Eyefinity and NVIDIA Surround. No mention is made of support for either AMD or NVIDIA's 3D implementation, but VSYNC and FOV adjustment are included.

The requirements aren't too onerous as far as modern titles go, speaking to some quite heavy optimisations the developers have hopefully done with regards to the port from the console including perhaps making use of more than two CPU cores. The big restrictions to note here are no support for Windows XP and a fairly hefty 20GB minimum HDD space to accommodate high resolution textures, video and audio. Those of us still on ~60GB SSDs may look at this as impetus to upgrade.

BioShock Infinite will be released 26th March 2013 on PC, XBOX 360 and PS3; digital copies will be available via Steam.