BIOSTAR TA990FXE: Heavy Artillery for AM3+ 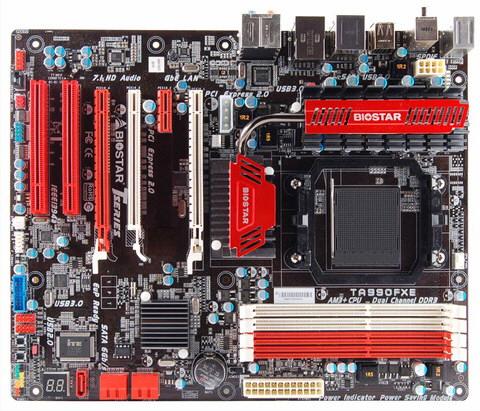 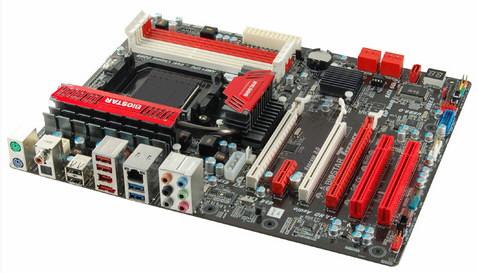 The board is equipped with four DDR3 DIMM slots and supports up to 16GB of dual-channel DDR3 800/1066/1333/1600/1866 MHz RAM as well as overclocking versions up to 2000 MHz. Todays market features few motherboards equipped with three PCI-E x16 2.0 slots, and the TA990FXE is one of few boards supporting their configuration of x16, x16, x4. It actually means the support for the most complex graphics configurations based on several graphics cards. Additional peripherals are realized with two PCI slots and one PCI-E x1 2.0.

The board features a great deal of interfaces and peripheral controllers. It sports five SATA3 6Gbit/s slots supporting SATA RAID 0,1,5,10, three USB 3.0 ports, six USB 2.0 ports, FireWire IEEE 1394a, 10/100/1000 Mbit/s LAN and 8-channel HD Audio. There is also a bracket for a serial port and a connector for an external eSATA2 3 Gbit/s interface.

The TA990FXE board comes with modern high-quality solid capacitors and is ready to run stably under the latest Windows 7 family OSes. The board supports the maximum list of BIOSTARs proprietary technologies including the BIOSTAR G.P.U (Green Power Utility) for optimal power consumption at low system load, an exclusive overclocking system, the Rapid Switch for quick restart, the Rapid Debug for hardware debugging with the help of a LED light, the BIOS Flasher and the BIOS Relife for updating or recovering BIOS from a USB drive, and the BIO-Remote 2 for remote control of home media system components from Android and Apple mobile devices. Overclockers will be pleased with the T-overclocker utilities for Windows which provide fine system tuning for experienced users.