The successor in AMD's RX 500-series 'Polaris' graphics cards, the Radeon RX 590, has long be considered to be a done deal, but official announcements and ETAs remain absent. Surely a release can't be too far away now though as retailers have begun listing partner variants. Case in point: a rogue listing on Newegg.ca discovered today for Sapphire's Radeon RX 590 8GB Nitro+ Special Edition, complete with pricing and technical specs.

This latest leak reveals specifications for the card which are close or identical to those already established. Assuming that the statement of '14nm FinFET' is a typo, the GPU is based on AMD's Polaris architecture but manufactured with TSMC's 12nm process, with the same number of active Compute Units (36) as the Radeon RX 580 before it. Transitioning to 12nm allows more to be squeezed from the GPU in terms of frequencies, including a Boost Clock of 1560MHz compared with 1340MHz on the reference RX 580. Sapphire are also pushing the memory controller a little further to 8.4Gbps from 8Gbps on the RX580. 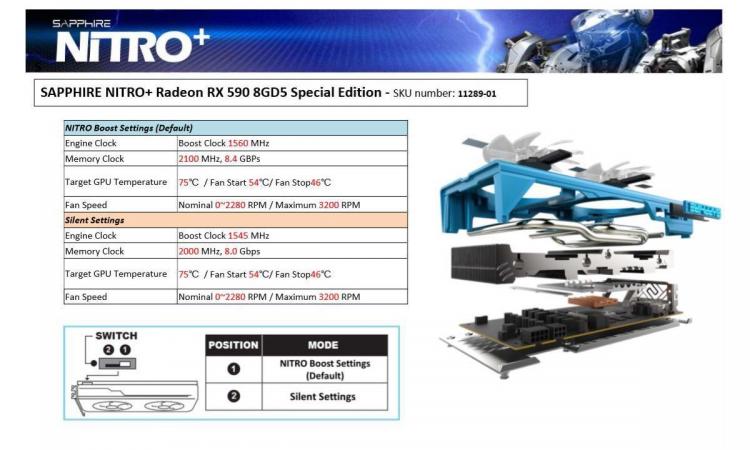 For this card Sapphire appear to be using a variant of their Dual-X cooling solution similar to that the RX 580 Nitro+ Special edition. This dual-fan design is a 2.2-slot solution that's striking in a world where matte black and RGB lighting is all the rage, and it's matched by a silver and blue backplate. Under sufficiently low load (with GPU temps below 46C) the fan will slow to a stop, making it a very quiet design when not gaming or engaging in taxing workloads. 75C is the target temperature, likely defining the effective maximum duration at boosted GPU frequencies.

Sapphire also integrate an RGB logo into the shroud, but control appears to be fairly basic compared with similar implementations from other manufacturers. 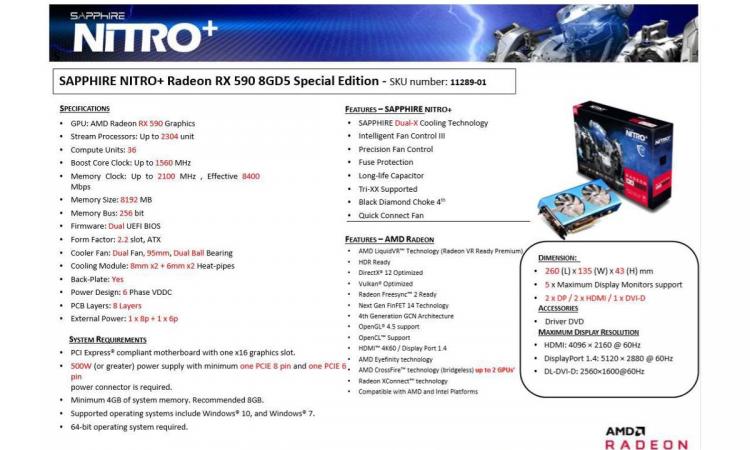 The Sapphire RX 590 8GB Nitro+ is clocked at a level substantially more than factory overclocked RX 580's, and if reflective of all RX 590's then clearly AMD believe it to be worthy of a full segment jump in naming scheme (rather than RX 585 for instance). The question is whether the price reflects performance. The Newegg.ca listing is of a 3rd party seller who has priced it at $499 from $599, but this is not necessarily representative of the final MSRP. In UK terms, 499CAD is ~£290 while 599CAD is ~£350. It's not clear if this is before or after taxes, but anywhere near £400 would put it dangerously close to Vega56 pricing, not to mention the competition from NVIDIA.