Bulldozer Pushes Overclocking World Record Out To Over 8.4GHz 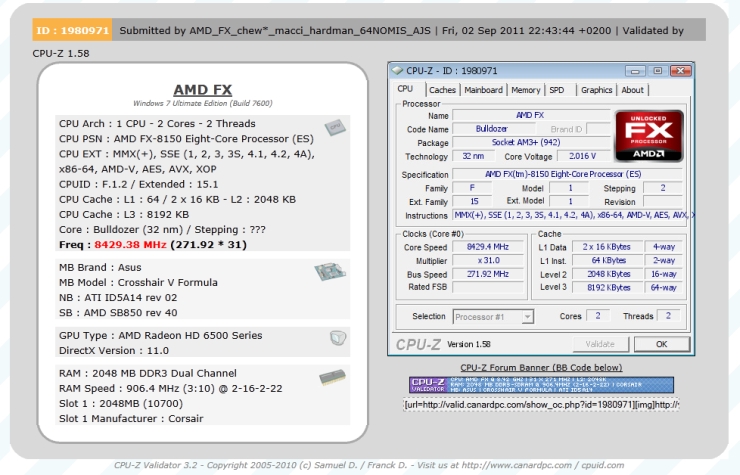 A CPU frequency of eight Gigahertz has been something of an overclocking Holy Grail in the modern era of multi-core CPU's. Before Bulldozer the overclocking record was held by a single-core Intel Celeron D which reached the frankly dizzying heights of 8.309GHz, achieved by Latvian overclocker Tapakah. Since then cold-boot bugs below the -180C threshold of Liquid Nitrogen seen in many recent CPU architectures worked against the efforts of the professional overclockers seeking to draw every last drop from the CPU, moving instead to benchmark runs as a key marketable metric.

Confident that they had the coldboot bug licked and upbeat with initial tests AMD had an elite cadre of overclockers select the CPU's most likely to reach and break the World Record from a number of engineering samples. On 31st August they finally reached the end-game at an overclocking event in Austin (Texas), and used Liquid Helium to push one special CPU with a single active module (2-cores) enabled to 8.429HGz, smashing the previous World Record and throwing down the gauntlet to competitors.

For us mere mortals this may all seem like fun but nonetheless frivolous. That's partially true, but along the way the stability of Bulldozer using a variety of cooling solutions and relevant CPU frequencies could be assessed in front of the cameras as part of the overclocking event. Of most interest to overclocking consumers will be the assertion that 5GHz stable on air or <$100 water cooling solutions was routinely achievable with AMD FX processors. The implication is that the AMD FX platform is pretty robust, doesn't throw out too much heat, and scales very well with the quality of cooling solution.

Roll on the release of Bulldozer, and a resumption of the CPU performance wars!

For AMD's write-up of the overclocking event visit AMD Maximum Speed. The verified data can be found here.

There are currently 523 user(s) online:
Google