BitFenix presents the Shinobi Mid-Tower, which is the third enclosure from the case new-comer. With its understated looks the Shinobi presents a stark contrast to the design of the Colossus gaming chassis. Even on the Shinobi series, BitFenix has applied their patented SofTouch surface, which is scratch resistant and adds to the overall looks of the chassis. For optimal cooling up to seven fans may be installed, catering to both the silent fans or the hardware enthusiasts.

The BitFenix Shinobi has been named after the deadliest warriors of the modern age, known for their silent and effective elimination of the enemy. These attributes can also be found within the case from BitFenix: up to seven 120 mm fans allow for efficient and silent cooling, while the interior is all black. Due to the unique SofTouch the Shinobi is also resilient against finger prints and scratches.

The Shinobi mid tower has taken its inspiration from the ninja it has been named after. While the Colossus has extravagant design, BitFenix has kept the exterior of the Shinobi simple and clean underlining the black camouflage looks, clearly extending it towards the interior as well. The windowed version ships with a unique side panel which allows for an additional fan to be installed on the window itself. The I/O panel, which has been placed on the front edge of the chassis, comes equipped with four USB 2.0 connectors and audio connectivity.

A look into the black interior of the BitFenix Shinobi reveals numerous features like the screw-less clips on all drive bays for the windowed version and a large opening in the mainboard tray to allow for easy CPU cooler installation for both versions of the chassis. There are not only three 5.25 inch bays, but also eight bays intended for hard drives. This allows for large RAID systems to be placed within the Shinobi without any troubles.
The air cooling possibilities within the Shinobi mid tower are versatile, giving both the silent fan as well as enthusiast overclockers the ability to equip the the case with the fans of their choice. BitFenix ships the windowed version with two 120 mm fans - one in the front and one in the rear, while the traditional Shinobi utilizes a single 120 unit in the rear. 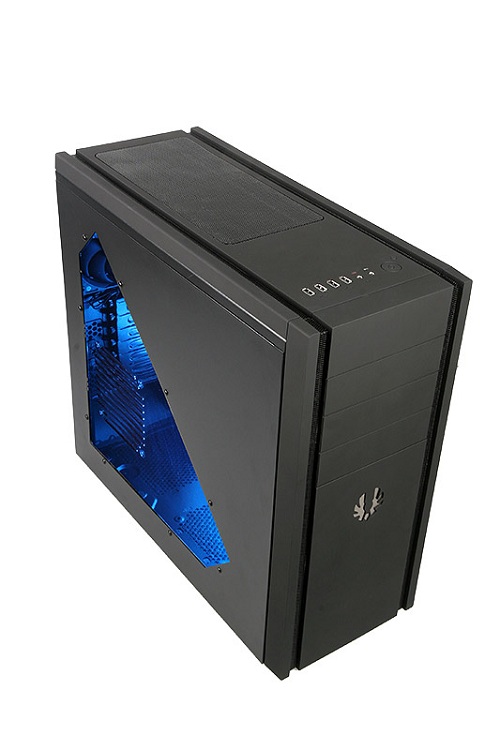 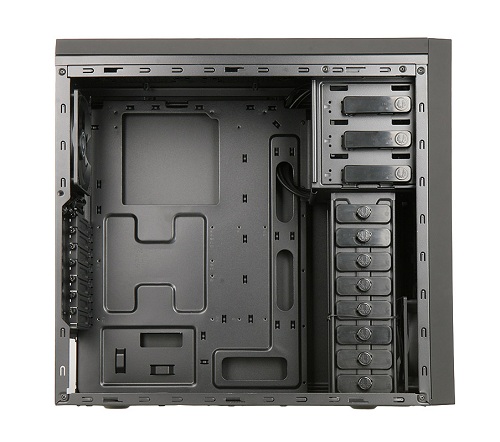 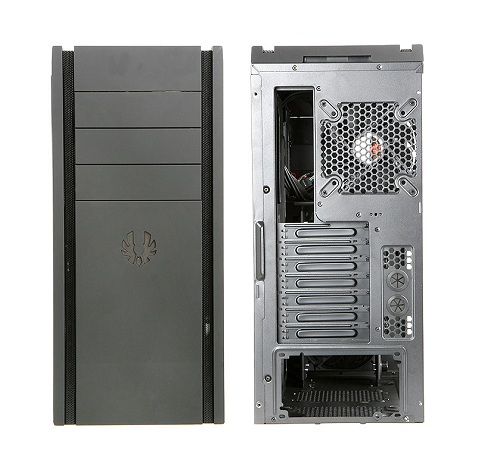