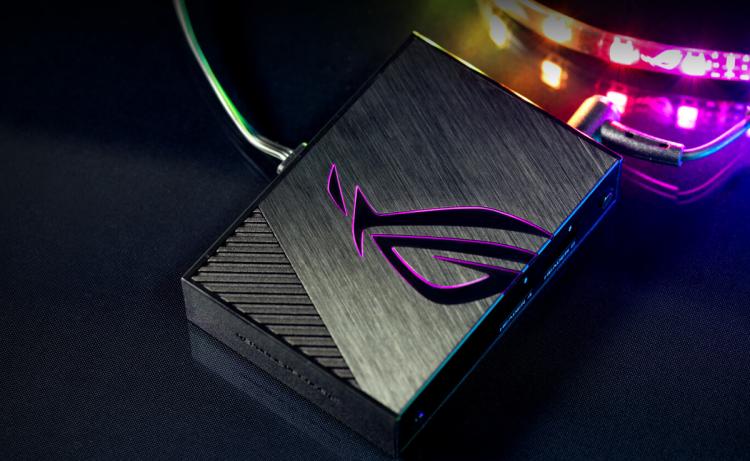 ASUS ROG had plenty to show off at CES earlier this year, and one of the products that flew a little under the radar was a new RGB LED controller to complement the burgeoning Aura Sync RGB lighting ecosystem. Now that controller - the ROG Aura Terminal - has officially been launched, bringing with it additional LED lighting options for your PC and home entertainment center.

The ROG Aura Terminal is a discrete module which users can use to power and control internal and external LED lighting strips. Enclosed within ROG branded brushed aluminium housing (complete with its own backlit ROG logo), the unit offers four independently addressable LED headers (for WS2812B addressable RGB LED devices (5V/ Data/ Ground)) and four lighting effects when used as a standalone system. It is capable of powering up to 210 LEDs via lighting strips, with a maximum of 90 RGB LEDs per strip. As an external unit, the connected LED strips can be placed anywhere you desire - on the rear of your monitor, behind your desk, surrounding your PC chassis; you get the picture.

When connected to a PC, the ROG Aura Terminal can exploit ASUS's Aura Sync LED control system to synchronise lighting effects across multiple compatible devices such as the motherboard, GPU or keyboard. In fact, ASUS's Aura Sync ecosystem also includes many components manufactured by a 3rd party, considerably broadening its appeal.

You can mount the ROG Aura Terminal externally (using the supplied USB 2.0 to micro-USB cable), internally (using the micro-USB to 9-pin USB header cable) or standalone (with the DC power adapter). As such, it's shaping up to be a exceptionally flexible piece of hardware.

Introduced alongside the ROG Aura Terminal is a new lighting feature ASUS are calling Halo Sync. Halo Sync software analyses the output in a GPU frame buffer and matches the LED colour to suit what is on screen. It works with both games and movies (so long as the video output isn't encrypted via HDCP) for a more immersive experience than static or fixed effect lighting would provide.

Up to three Terminals can be configured using the software, giving you plenty of scope to add more lighting around your entertainment space.

More information can be found at https://www.asus.com/Motherboard-Accessory/ROG-Aura-Terminal.