It never ceases to amaze us just how compact hardware is becoming. Take the Gigabyte BRIX for example. It's an ultra compact, versatile DIY PC kit that blows size norms out of the water. Not only are the higher end models powered by Intel Haswell CPU's but they also feature quite a range of connectivity options making it ideal for a HTPC setup and even in a home or office situation. 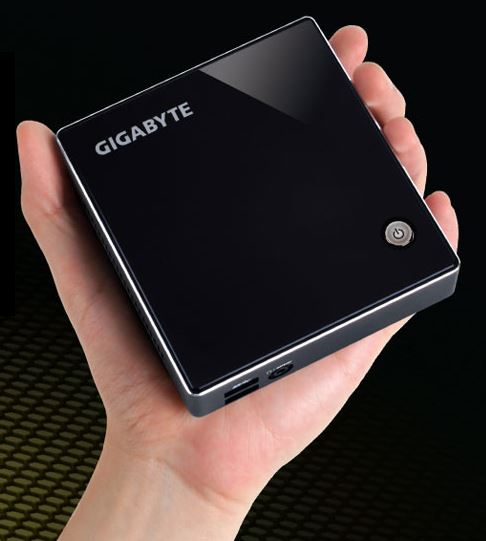 The BRIX is a 29.9mm x 107.6mm x 114.4mm box that is available with a choice of five 4th generation Intel processors including i3, i5, i7 and Celeron models. This means you can choose which model suits you best whether it be a simple work station, internet access point or a high end multimedia station. The Haswell CPU's have the added benefit of being very power-efficient. Not only that, the BRIX has support for HDMI and DisplayPort and can power 2 monitors at once. It also has built in gigabit ethernet, four USB 3.0 ports (two at the front and two at the back) as well as a headphone/SPIDF output.

Now because this is a kit the BRIX is not complete on purchase. Included in the kit is the Gigabyte motherboard (CPU is onboard), a wireless module which is a mini PCIe Wi-Fi/Bluetooth combo, power adapter and VESA bracket for mounting behind a monitor or HDTV; What's needed is a mSATA drive, SO-DIMM DDR3L (DDR3 1.35V) Memory (max of 16GB) and the operating system. No prices have been announced.