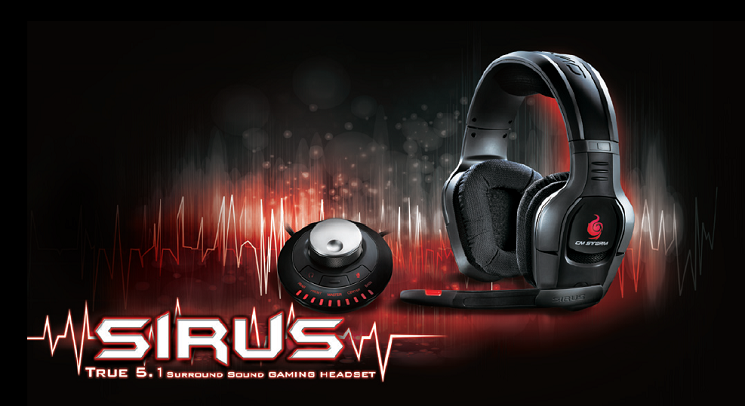 Boosting no less than 8 speakers (4 on each side) Sirus delivers powerful, immersive 5.1 surround sound and marks the beginning of a new range of CM Storm audio gear for gamers and audiophiles alike.

Immense Sound
Sending shockwaves throughout the industry, Sirus delivers real 5.1 surround sound with a dedicated extra large 40mm sub driver for explosive bass sound. Thanks to no less than 6 additional 30mm drivers, each fed by a discrete audio channel, Sirus produces precise and crisp directional sounds. Combine all channels and pair it with the bundled Tactical Mixing Console and you get full 5.1 channel-adjustable, real-time 360 degree audio. In addition, Sirus is coupled with a uni-directional microphone with background noise cancellation that enables crystal clear communications with teammates to coordinate strikes or mock your enemys after a dominating victory.

Suitable for extended Missions
Engineered to provide ultimate comfort and style, CM Storm Sirus features a futuristic military design and extra large comfortable cushions that sit around your ears and not on them. You can choose between smooth leatherette and breathable weaved earpads that can be clipped on and off in-combat within a few seconds.

On-the-Fly Customizations
Setting itself apart from the competition, the CM Storm Sirus includes a Tactical Mixing Console that is capable of precise real-time adjustments to the all separate 8 speaker channels. Loading an FPS game? Quickly lower the center channel and raise the remaining channels to simultaneously reduce distractions from your own gun noise and steps and increase your ability to detect enemy footsteps with pinpoint accuracy.

Advanced Tuning
CM Storm Sirus features a Tactical Software Console to further tune the performance of the headset to each users needs. Those with a keen ear will appreciate the ability to delve deeper into the settings to make detailed changes to various levels or disguise their voices with a few simple clicks.

Praised with awards before hitting the battlefields!
Sirus has already won the Red Dot Design Award 2011 and Computex Design & Innovation Award 2011, both of them praising its futuristic rugged carbon looks with smooth rubberized surfaces that not only prevent fingerprints and smears but give it a solid comfortable grip, and its innovative 8 massive speaker design with on-the-fly channel control.

The CM Storm Sirus 5.1 Surround Sound Gaming Headset will be available in mid-August 2011 at an MSRP of £85,00 at every serious gaming gear shop.