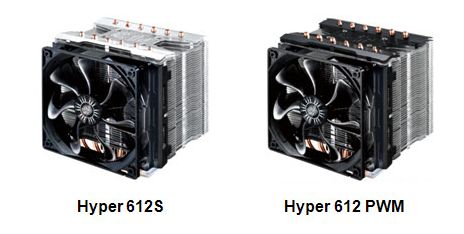 The Hyper 612-series features a familiar tower layout with compatibility for up-to two 120mm fans. Cooler Master identifies the arrangement of the six heatpipes as a key part of the design, locating them directly above the hottest areas of the CPU to improve cooling performance by turning them into '12 virtual heatpipes'. Furthermore the HSF fins are spaced widely to improve air-flow at low fan RPM, reducing the overall operational noise. To facilitate easy installation of new fans, or just removing dust from the heatsink and fans already in place, a clip-on fan bracket is supplied. With fan attached the Hyper 612 range is 163mm tall, 5mm taller than the 212+ but not quite as tall as the V6 range.

To be released in the EU in September, the Hyper 612S features a 120mm fan optimised for low-noise performance with similar blade design to that of the popular Hyper 212+. Bundled with the 612S is an in-line down-volt adaptor, reducing fan noise further for those who prefer their HSF super-quiet. Fans of silver interiors will appreciate the silver top on the 612S heatsink.

By contrast the Hyper 612 PWM exchanges this fan for a more powerful 120mm PWM version, allowing the user absolute control via BIOS or other motherboard software [on compatible motherboards]. In addition, the heatsink is topped in stylish black, making this product specifically desirable to users with all-back interior case aesthetic. Regrettably, just as the Hyper 612S doesn't appear to be released in the US, the 612 PWM won't be making an appearance in the EU. 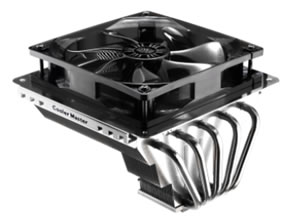 The GeminII S524 is an evolution of Cooler Master's GeminII, a 90-degree air-flow HSF which blows air directly on to the CPU socket and surrounding components to provide cooling to your CPU, Memory and Mainboard. The electroplated copper base and 6 heatpipes add a touch of class to the look of the HSF, making it almost a shame not to be showing it off. An included 120mm fan allows air to be moved with low noise; users wanting more air-flow at lower noise will welcome 140mm fan mounting options. A HSF cut-out also allows RAM of up-to 47mm in height to be fitted, making it compatible with most RAM on the market. CPU Socket compatibility is as you would expect, support is listed for each of the main Intel and AMD types.

With the fan attached the GeminII S524 checks in at 105mm tall, and without the fan it's a diminutive 73mm in height.