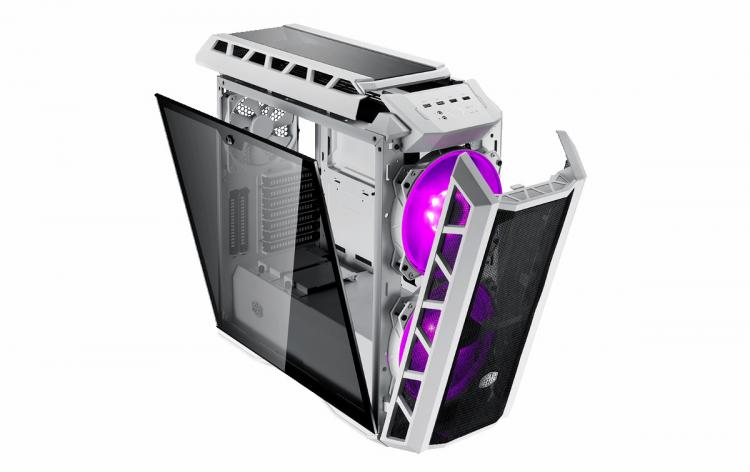 Cooler Master are out in force at CES 2018 this year, and alongside new CPU cooling solutions are also demoing their 2018 range of PC chassis. Comprised of the MasterCase and MasterBox series, as well as two refreshes of classics past, it makes for some pleasant viewing on this wintry January afternoon. 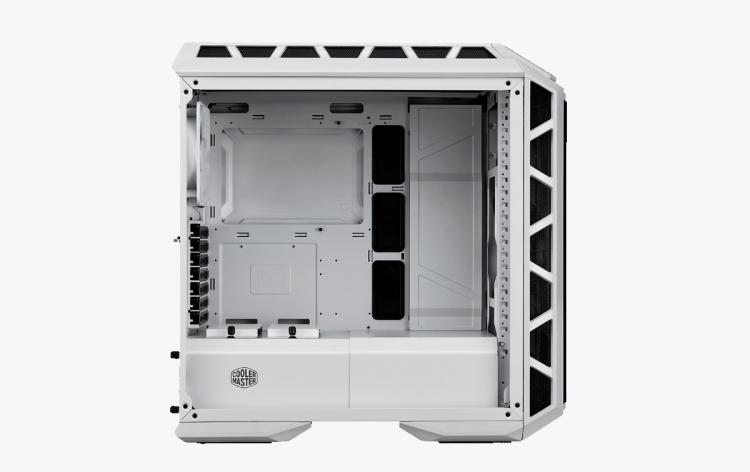 The H500P Mesh White is a variant of the already well-established MasterCase H500P, originally unveiled at Computex 2017 and released late last year. Sized as a mid-tower ATX design, it's more than suitable for higher performance systems with wide component options including bespoke water cooling. This new model changes up the colour-scheme a little, favouring a predominantly white interior and exterior rather than gunmetal grey, but otherwise retains the RGB lighting options of the original through two 200mm front-mounted fans that are compatible with a host of LED control schemes.

In another change from the H500P the Mesh variant has a pre-installed mesh front fascia rather than tempered glass. Although that will impact the clean lines a little, it will also improve air-flow somewhat; plus we wouldn't be surprised if Cooler Master offer a clear front panel as a modular option in the near future.

Meanwhile, Cooler Master's H500M offers one of two different front panels - either a mesh design, or combination of mesh and tempered glass. Both interior and exterior are black, and share other members of the H500 series - namely space for motherboards comfortable up to ATX and as large as EATX in a pinch (12" x 10.7").

Both availability and pricing for the MasterCase H500M and H500P Mesh White cases should be revealed in the next month.

Cooler Master's MasterCase MC-Series strongly leverages their FreeForm Modular system, unlocking the owner's creativity without the need for advanced modding skills. At CES Cooler Master showcased the MC-Series to great effect, presenting five baseline designs which can then be modified through replaceable panels and accessories. These designs are: 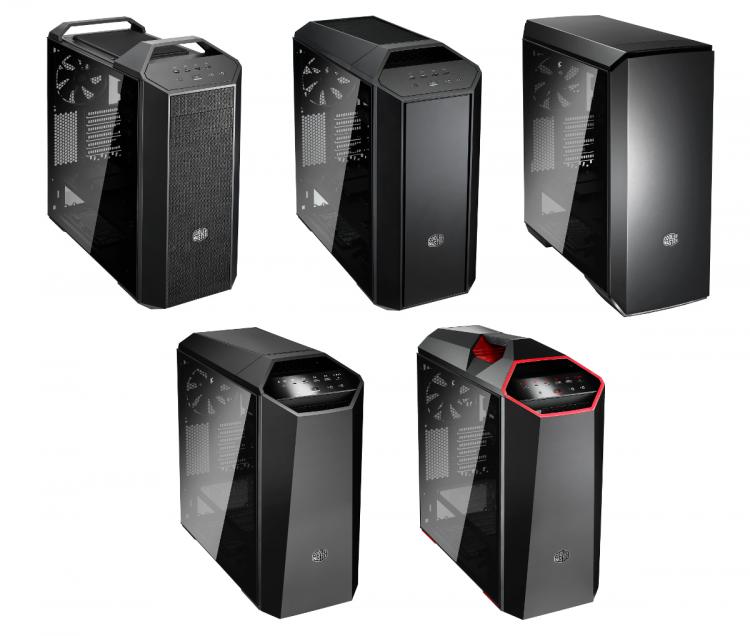 An ATX design with tempered glass side panel and removable partition plate (separating PSU and motherboard compartments) that's available as an all black option. It's something of a blank canvas, and is the most affordable of the line presented at just £84.99 inc. V.A.T.

The MC500P meanwhile adds both mesh and solid front panel options in the retail kit, as well as a panel to enclose the roof (rather than two carry-handles as in the MC500). The added panelling compared with the MC500 pushed the price to £119.99 inc. V.A.T., and allows for a more refined look out-the-box.

Sitting at the same price point as the MC500P is the MC600P, and the differences are fairly subtle. The case is slightly longer than its sibling (by a whopping 3cm), but appears even more understated. Air flow vents are a touch more discrete (and perhaps a touch more restrictive) but the model also includes RGB LED strips for front lighting that isn't present on the MC500P. Take it away for £119.99 inc. V.A.T.

The MC500M meanwhile substantially widens I/O connectivity options compared to the base model, adding USB 3.1 & Type-C options to the front panel as well as an integrated fan controller. The model also changes up the aesthetics by including RGB lighting on the partition plate to draw attention to your pricey PCIe cards. Externally, the design differs from the base model through top and front panels that have a yawning vent for air flow, but eschewing the predominantly mesh design of the base MC500.

Finally, sitting at the top of the MC-series models shown off at CES 2018 is the MC500Mt. This variant of the MC500M builds on the design by adding a second tempered glass side-panel as well as red trim highlights to both feet and front panel. I/O options and other features remain the same, with the exception of a cut-away from the roof enclosure that exposes what appears to be a carry-handle for the case. The MC500Mt is priced at £189.99 inc. V.A.T. in the UK.

Showcasing Cooler Master's own creativity at CES 2018 are a pair of ATX chassis new to the Q-series, the MasterBox Q300P and Q300L. 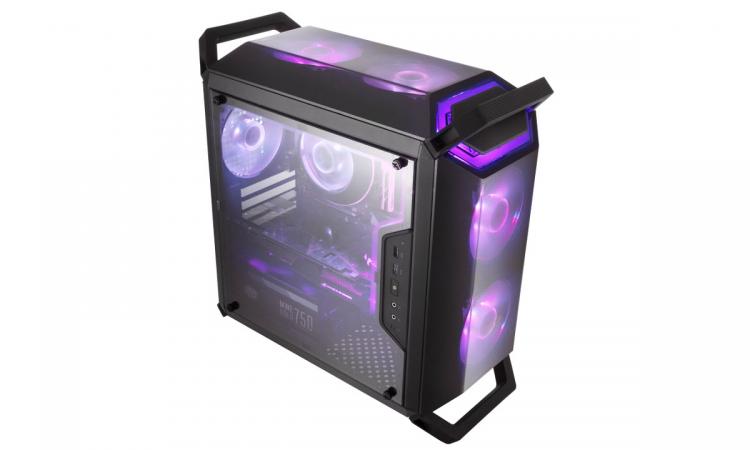 The most striking of the two is the Q300P, a more portable than usual PC chassis thanks to the inclusion of four detachable handles. Despite this however aesthetics are given far more than the merest nod; both front and top panels use their DarkMirror technique, offering an occluded window into the chassis that will highlight lighting beneath rather than reveal unsightly fixtures and fittings.

The MasterBox Q300L is a more simple design, despite the patterned top and front panels. Like the Q300P it has a windowed side-panel, but other aspects are very much back to basics. 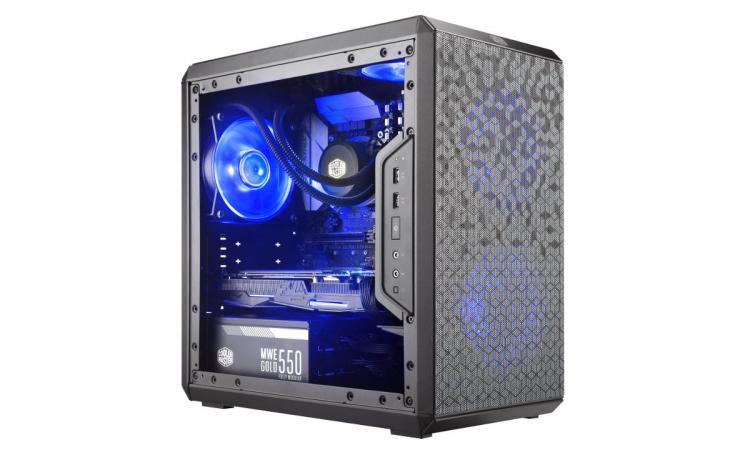 The MasterBox Q300L is available for a very reasonable £39.99 inc. V.A.T, whereas the Q300P is a fascinating option given the unique aesthetics at £64.99 inc. V.A.T. As with all affordable chassis however the proof of the pudding will be in the build quality. 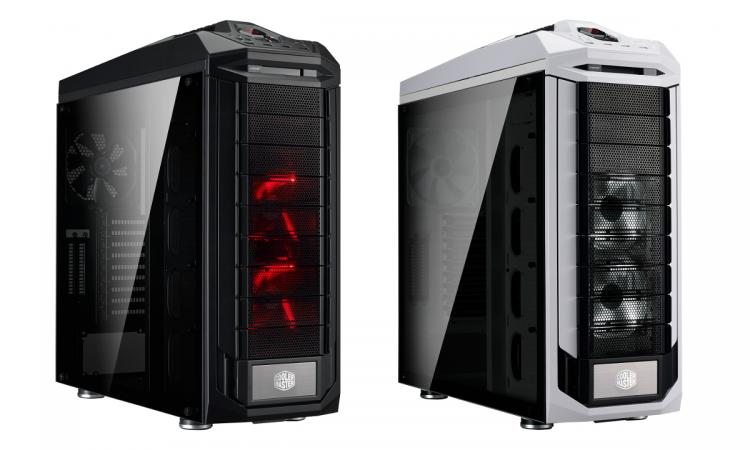 Evoking chassis of an era perhaps thought long past are updated versions of the classic Cooler Master Trooper and Stryker designs. Although externally almost identical to the originals (with the exception of a tempered glass side panel), both Trooper SE and Stryker SE interiors have been updated to be a little more user-friendly and further improve cable management to make assembling a good-looking system interior more straight-forward. Both the black Trooper SE and white Stryker SE are available with an MSRP of £149.99 inc. V.A.T. 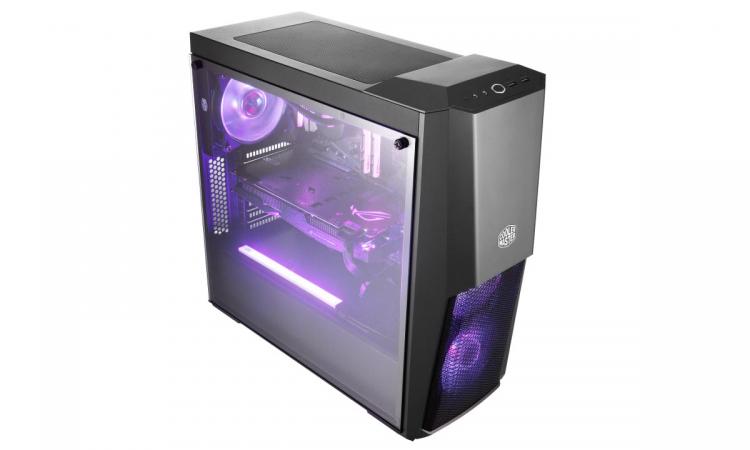 The final striking design shown off by Cooler Master this year is the new MasterBox MB500. This design has a distinctly retro feel, harking back to chassis from the late 90's and early 2000's but without the beige and baffling interior design. A wide door covers the optical drive bay positions, whilst fans are exposed below through a mesh grill; I/O sits on the top for easy access should the case be positioned at knee-level. Internally, the chassis is almost classically ATX, with the exception of a cover for the PSU section.

Also including a tempered glass side-panel and three 120mm RGB fans pre-installed, it is priced at £64.99 inc. V.A.T.

More information will be divulged by Cooler Master over the next few weeks, including further details on the upcoming MasterBox TD500L. Plus, the Taipei-based cooling specialists are unveiling plenty of non-chassis products alongside also due to be released imminently. It looks for all the world like Cooler Master are going to have an extremely busy first half of 2018.