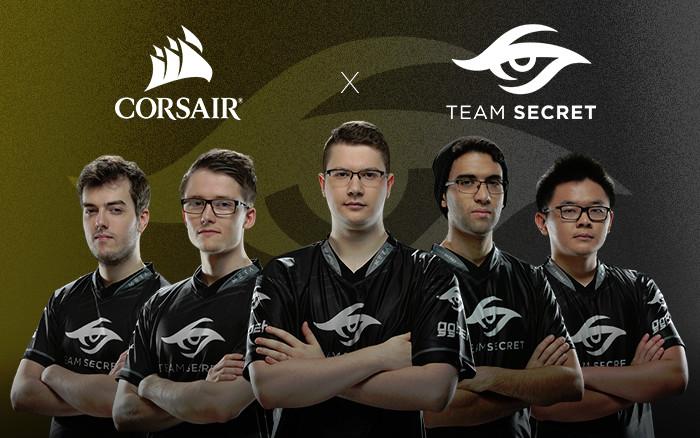 FREMONT, CA  March 29, 2018 - CORSAIR®, a world leader in PC gaming peripherals and enthusiast components, today announced a major new partnership with Team Secret, a world-renowned esports organization with teams primarily located in Europe. Team Secret is one of the most successful DOTA 2 teams in history and will be equipped with CORSAIR gaming keyboards, headsets, mice, and mouse pads as they strive to capture the biggest prize in esports - The International DOTA 2 championship.

With a veteran roster featuring some of the worlds best DOTA 2 players, Team Secret cemented their status as a team to beat with victory at the Shanghai Major in 2016 and have continued their dominance ever since, most recently triumphing with a clean sweep in DreamLeague Season 9 to take home a $125,000 prize.

"We've been fans of Team Secret for a long time and are delighted to start an official partnership with them," said Lauren Premo, Director of Gaming Marketing at CORSAIR. "With the combination of a premier DOTA 2 squad and long-term organizational aspirations, were excited to provide high-performance products to one of the best teams in the world and help them reach even greater heights."

CORSAIR has always been one the very best peripheral brands on the scene. Many of our players have used CORSAIR gear in the tournament scene for years, and even more utilize CORSAIR PC components when building a new gaming rig. With this partnership, Team Secret will be fully equipped with the latest tech from CORSAIR to help elevate our performance even further. We look forward to achieving success together said John Yao, CEO of Team Secret.

To learn more about Team Secret visit https://teamsecret.gg/]T, and as always comprehensive information on Corsair's gaming periphberal lineup can be found at https://www.corsair.com/us/en/gaming.