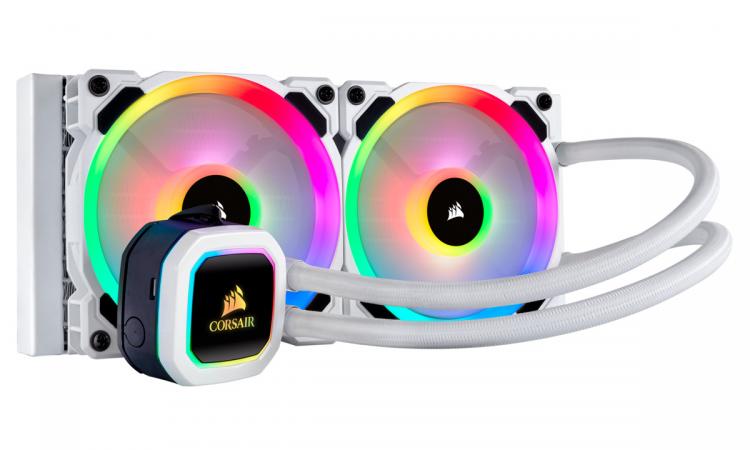 Citing problems with a small number of units in circulation, Corsair have issued a limited recall of their H100i RGB Platinum SE closed loop CPU cooler. The manufacturer are treating it as a precautionary measure but, due to the nature of the flaw, consumers should stay informed and act on it if applicable (hence this notice).

The affected units are in a batch of the H100i RGB Platinum SE in White and doesn't affect other H100i units sold; as a result the number of affected customers should be small. Replacement units are now available through their RMA process, which wasn't the case when the recall was first announced on March 25th.

1. We discovered that less than 1% of Hydro Series H100i RGB PLATINUM SE coolers sold to date are leaking small amounts of coolant into the hose sleeving. These leaks are easy to spot, as the sleeving is white, and coolant is bright green.

2. While this problem should be immediately visible when the box is opened, it can, in some cases, manifest over time.

3. Only a select lot code of affected units has been sold, lot code 1852. You can identify your coolers lot code by referring to its packaging, or the serial number sticker on the coolers radiator (see picture below & attached).

4. If your cooler is in lot code 1852, please contact CORSAIR at https://support.corsair.com to arrange for an RMA and replacement of your cooler free of charge. Replacement units will be available from April 2nd 2019.

Although this will come as a disappointment to affected customers, credit should be given to Corsair for acting on the issue rather than attempt to brush it off as user error. Corsair have also apologised for the disruption this replacement process will cause.