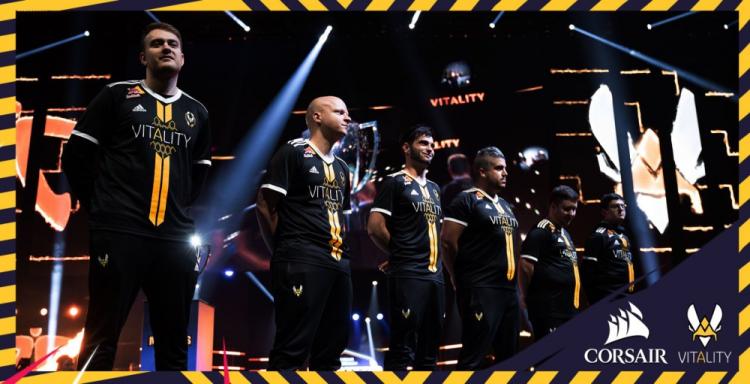 FREMONT, CA, January 21st, 2020  CORSAIR®, a world leader in high-performance gaming peripherals and enthusiast components, today announced a multi-year partnership with Team Vitality, the leading esports team in France. Featuring some of the most successful professional players in the world across a wide variety of competitive games, such as Counter-Strike: Global Offensive, League of Legends, Rocket League, Fortnite, and more, Team Vitality will be equipped with award-winning CORSAIR peripherals to help them win in 2020 and beyond.

Team Vitality players will receive a wide range of premium CORSAIR products, such as the K70 RGB MK.2 Mechanical Gaming Keyboard and NIGHTSWORD RGB Tunable Gaming Mouse, to use at the highest level of competition. In addition, CORSAIR will collaborate with Team Vitality players to create specially engineered peripherals designed for high-level professional play.

Since its founding in 2013, Team Vitality has established itself as a formidable leader in French and international esports, currently employing more than 50 players including Zywoo, one of the best CS:GO players in the world, and Cabochard, a renowned top laner in LoL. Team Vitality is headquartered in Paris at V-Hive, with an additional location at Stade de France. Both locations will be fully equipped with CORSAIR peripherals.

We couldnt be more excited to partner with the biggest name in French esports, said Lauren Premo, Director of Gaming Marketing at CORSAIR. Team Vitality has consistently demonstrated its championship pedigree with major victories in the worlds most spectated games, such as CS:GO, and were ready to cheer them on as they win even more using CORSAIR gear.

"This collaboration with the powerhouse CORSAIR marks another milestone for Team Vitality, said Nicolas Maurer, CEO of Team Vitality. Being able to sign a multi-year agreement with such an esteemed brand proves once again the growth of our sector. As esports viewership continues to rise, we are proud to be amongst the leaders pushing in this direction. We've been glad to work professionally with CORSAIR on an ambitious project for both parties, built around a complete and multi-faceted activation plan. It was also important for us to be associated with a respected and reputable brand like CORSAIR to give our professional players the best performance possible, thanks to their very high-quality products."

Founded in 1994, CORSAIR has grown from pioneering the high-performance DRAM market into one of the worlds leading providers of high-performance gaming and streaming products. CORSAIR offers a complete range of products to equip gamers, enthusiasts, and esports athletes, including mechanical keyboards, precision gaming mice, wireless headsets, premium PC components, and the CORSAIR ONE fully-integrated gaming PC. With a company-wide commitment to quality, innovative design, advanced features and high-performance, CORSAIR products have won thousands of media and industry awards, earning their place in gamers hands and PCs following years of development and engineering by a team dedicated to building great products that they themselves would want to use.

A global esports organisation, Team Vitality is dedicated to the development of excellence and forging a new generation of esports athletes. Home to the worlds best players competing across nine titles, Team Vitality is one of only ten teams in the League of Legends European Championship, Europes most watched esports league. A globally recognised lifestyle and entertainment brand, Team Vitality and its players have over 20 million followers across social media and carry more mainstream sponsors than any other esports team including adidas, Renault, Orange and Red Bull. The team has participated in more than 1000 competitions and its players have stood atop 250 podiums around the world.

Founded in 2013 by Nicolas Maurer and Fabien Devide, Team Vitality is headquartered in the heart of Paris in V.Hive, their state-of-the-art public esports complex and has high performance training centres in the iconic Stade de France and Renault Sport Racing in Oxfordshire, UK.

There are currently 305 user(s) online:
Google