Could this be the fastest passively cooled graphics card?

Originally seen last year, the latest passive card from PowerColor is going to be a Radeon HD 6850. This is remarkable, as traditionally passive cards have been firmly placed in the low end segment as high end GPUs simply produce too much heat for a passive solution to be feasible. The HD 6850, is a high end card with high end performance, albeit at the very bottom of the pile. Take a look at the Vortez HD 6850 review where we looked at a very slightly pre-overclocked HD 6850. It's certainly capable. 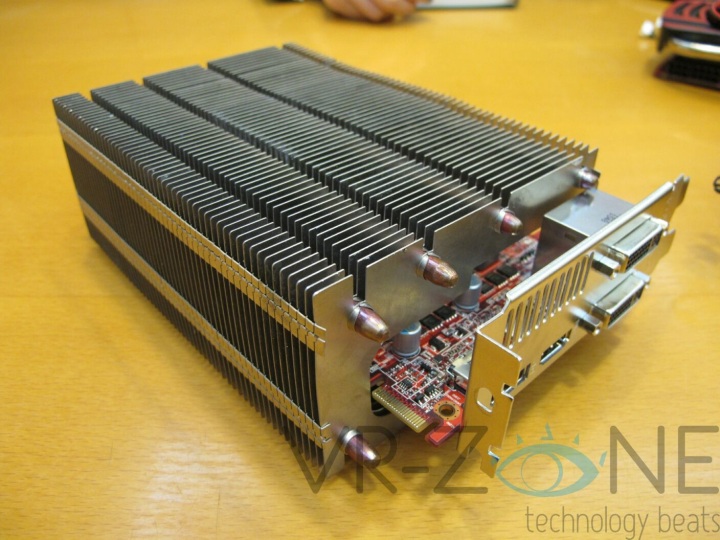 We're told there's a GPU in there somewhere

The PowerColor HD 6850 will make use of a single 6-pin PCIe power connection, but this is still considerable potential heat to be dissipated. This is possible through the rather large, and most likely obtrusive, heatsink as you can see above. It looks as though it will take 3 slots, with an extra slot above the GPU obstructed. Perhaps the other reason why this card is chosen is because of its thermal characteristics. It is based on the popular Barts core, but clocked to just 775 MHz (stock), when we know that there is potential for 1000 MHz+ clocks on this core with voltage control. This means it's fairly thermally well behaved compared to the higher end offerings.

Other specs include 960 stream processors, 1GB GDDR5 RAM with a 256-bit interface. These remain stock specifications, though we understand the PCB layout has been significantly revised over the development cycle. More than likely a result of stability issues with proximal toasty components.

Is there a market for such a card? Probably, but only a small one - expect to pay a significant premium for all that aluminium it's wrapped in. As a proof of concept, we're certainly enjoying it.

What do you think about this card? Share your thoughts in the forums!