Audio aficionados Creative are once again returning to the fold this month with the announcement of a new Sound Blaster soundbar that might make the ears of gamers worldwide perk up a bit. The Sound Blaster Katana of 2017 vintage - one of the most beloved gaming soundbars on the market - is getting a refresh for 2021 in the form of the Sound Blaster Katana V2, with the goal of honing that particular blade for the next generation of games and gamers. This new Katana takes on board many of the criticisms of reviewers and users of the time, while retaining much of the flair that made the original such a favourite.

The Sound Blaster Katana series incorporates two key hardware elements to generate a fully immersive audio experience both soundbar and subwoofer. This style continues with the Katana V2 except that the audio output is upgraded from 2.1 to 5.1 spatial surround, with each of the five drivers powered individually by Creative's own proprietary multi-core DSP controller. Fabric dome tweeters offers cleaner and more refined highs, while the dedicated subwoofer delivers deeper and sustained lows.

However, there may be times when full audio output isn't desired. If that's the case then users can take advantage of the Super X-Fi UltraDSP chip in an amplified headphone port, supporting Creative's Super X-Fi Headphone Holography technology to generate an optimised and more realistic sound-stage.

The Katana V2 also supports SXFI BATTLE Mode, a technology that places game-generated audio in virtualised 3D space in a manner that better represents both distance and direction. Scout Mode is also support as a longstanding feature that highlights more subtle sounds to detect enemies before they are seen.

Beyond gaming, the Katana V2 will also support your streaming service of choice thanks to an integrated Dolby Audio decoder, letting you binge your favourite show just as it was meant to be experienced. 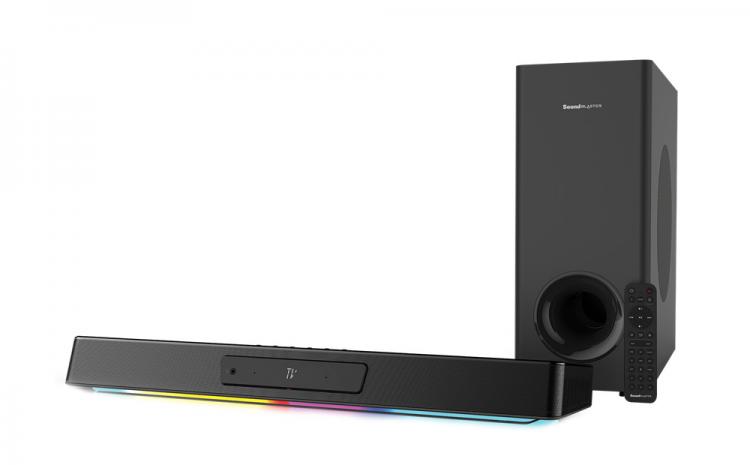 Connectivity - Acting as an Audio Hub

One of the oft-repeated criticisms of the original Katana (alongside 2.1 audio limitations) was the lack of HDMI support, but that's been rectified with the Katana V2. The soundbar module now has five discrete inputs that should cater to a huge range of needs: HDMI ARC, Optical, USB-C, AUX-In and Bluetooth 5.0. The Katana V2 supports a wide range of hardware well beyond PC and Mac as a result, up to and including the newest consoles and even a plethora of mobile and set-top devices.

Augmenting this connectivity is an on-board EQ which can be controlled through the Creative smartphone app, helping you adapt the audio output not only to your preferences, but also the acoustics of the room in which the Katana is housed. The included wireless remote can also help to get the most out of the Katana without needing to move an inch.

And as the final cherry on top, the Katana V2 continues to incorporate the RGB lightbar that so many gamers are enamoured with, but includes profiles and reactive lighting modes that will accentuate any gaming experience.

The Sound Blaster Katana V2 is available to pre-order today from [url=]Creative.com[/url] at an MSRP of £299.99 (inc. V.A.T.), with shipping set to start from October 8th. More information can be found at the Katana V2's product page.