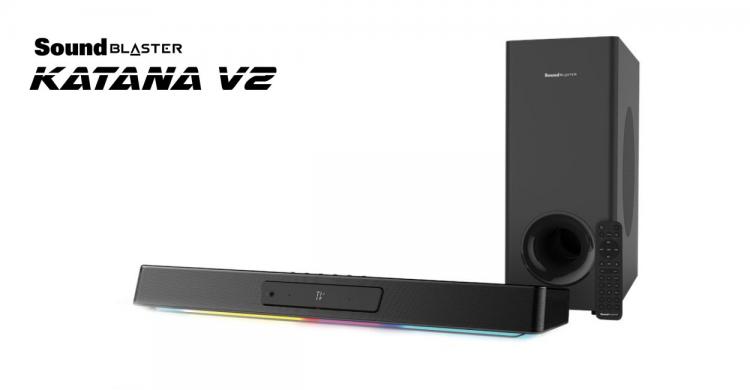 Check out our review of the original Creative Sound BlasterX Katana gaming soundbar.

The Sound Blaster Katana V2 personifies the culmination of Creative's best audio technologies as it brings games and movies to life through its 5.1 channel playback. It retains the acclaimed tri-amplified design of its predecessor, where each of its 5 drivers is powered individually by Creative's proprietary multi-core DSP controller. The Katana V2 features the Super X-Fi Headphone Holography, a multiple award-winning technologies which recreates the soundstage of a high-end multi-speaker system in headphones.

The Sound Blaster Katana V2 can be customized to sound and look just the way users like it. When connected to the Creative app (both desktop and mobile), users can choose from various EQ settings and tune the audio with the Acoustic Engine suite. Furthermore, the redesigned RGB lighting strip features various illumination mode selections across 16.8 million colours, which intuitively reactive to the playback content. These settings can be saved as customized profiles on either the app or the programmable buttons on the remote control.