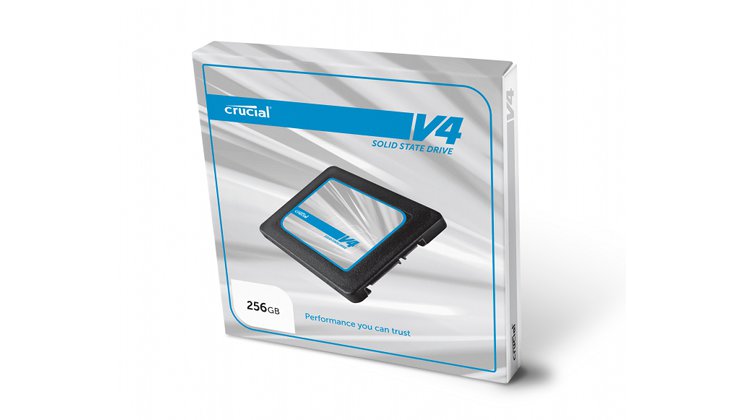 SSD pricing in the last few months has been exceptionally volatile as manufacturer's have continued to cut prices and clear stock, but your choice for upgrading older home/small business systems has remained a little unclear. If you're looking for an SSD for a home system or Laptop but are wary of some of the budget-busting products on offer Crucial have just released a product which you may find attractive. The new v4 range from Crucial features a much more modest set of performance figures than the mature m4's, and are matched by correspondingly modest pricing. 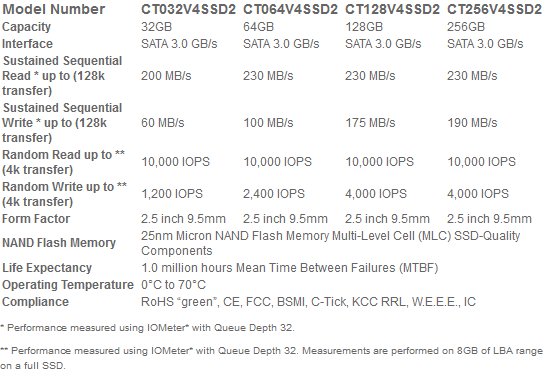 The Crucial v4 drives utilise a SATAII 3Gbps connection and hence are ideal for older systems needing a cheap performance upgrade from slower HDD operation. The drives utilise 25nm Micron NAND MLC memory, and likely have been developed with an eye towards clearing out old inventory rather than as a development platform for new NAND; the 3 year drive warranty indicates that they view the medium-term reliability of the drive with some confidence.

Inc. VAT Pricing is as follows, direct from Crucial:

The 128GB model in particular occupies a sweet price spot, and should probably be the most attractive to most users. The 32GB model is interesting for thought for Intel RST on Z68/Z7X motherboards, but many would want to see a faster option even though performance improvements would likely be marginal. For desktops and laptops compatible with the 9.5mm drive height the 256GB model is very keenly priced for a combined boot, application and game SSD. The least attractive drive by far is the 64GB model, fulfilling neither the niche role of the cheaper 32GB model, not the capacity and £/GB value of the 128GB v4.

The drives are available direct from Crucial.com/uk, and are likely to appear at retailers soon.