Crucial Launch M500 SSD With Up To Terabyte Densities 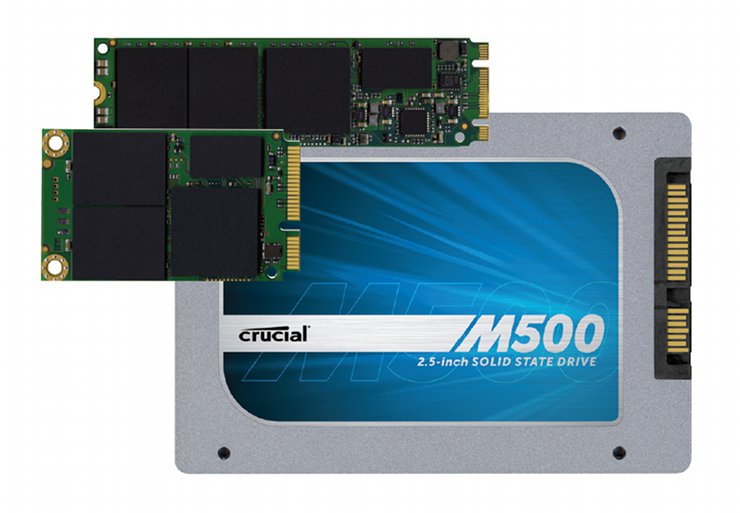 Crucial's newest consumer-class SSD was announced coming out of CES 2013, raising more than a few eyebrows thanks to its aggressive pricing model and high-end performance specs for a 2.5" drive. It's now been revealed that Crucial have hit their planned Q2 2013 release date with immediate availability of the M500 range from today in US and UK stores.

The M500 is based around Micron's 20nm MLC NAND and first-party controller to unlock read speeds of up to 500MB/s over SATAIII and high IOPS performance, with write speeds largely dependant on drive density. As expected Crucial can pack up to 960GB of storage into the standard 2.5" form factor, although additional capacities of 120, 240 and 480GB also available. Interestingly the M500 drives have significantly higher over-provisioning than the Crucial M4's, mainly down to the need for reliability improvements in the transition to 20nm NAND.

Gone entirely are the 60/64GB capacity standards which will gradually be phased out industry-wide as storage requirements become strained. In context, 120GB is a healthy starting point for an OS installation that can also cope with an additional suite of commonly used software. Even though you may not also want to dedicate your whole Steam folder to it, you should be confident in throwing a 23GB+ WoW installation on there alongside OS and Office suite, a sensible benchmark for home systems. In the case of the M500 a 120GB drive will set you back close to £100, which is competitive rather than startling and conforms to current market norms.

With the exception of the 960GB variant none of the drives will set the world alight in terms of pricing, but performance aside from the headline figures seems impressive. 80K/80K read/write 4k IOPS for both 480GB and 960GB drives is top-tier and even the smaller drives in the range feature handy bumps in this metric. Whilst less important for everyday users, specific classes of workload will see major benefits in conjunction with the larger capacities.

The M500's party piece is cramming 960GB into a single 2.5" drive whilst keeping costs and thickness under control. We reported that Crucial were targeting a $600 MSRP (excl V.A.T.), and have been able to deliver through sales on their US website. Unfortunately the UK Pound has weakened significantly in the intervening period resulting in a £476.39 inc. VAT MSRP, however that's still a pretty awesome figure considering the 480GB drive will set you back £316.79.

Both Crucial.com/uk and UK etailers have begun listing the drives, although some capacities remain on preorder and may be under high. Speciality mSATA and m.2 form factors are also available, although the m.2 variants are limited to 480GB. Drives are backed by a 3yr limited warranty. For more information visit Crucial.com.