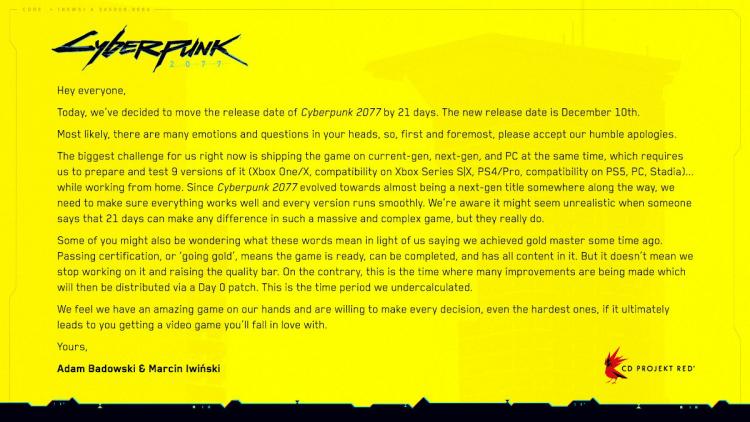 It's deja vu all over again this evening as CD Projekt Red announce yet another delay to eagerly awaited RPG Cyberpunk 2077. Citing the challenges of launching on multiple next-generation platforms concurrently (as well as PC), they've taken the extraordinary step of pushing the release date out to December 10th 2020 from November 19th.

You may recall that the game's original release date was April 2020 before being rescheduled to September. This again proved to be overly optimistic, leading to a new projection of November 19th. December 10th therefore represents a delay on the order of 8 months, which isn't all that bad considering the impact of COVID-19 mitigations on development.

It has been widely reported that CD Projekt Red developers were working under crunch conditions, and this delay may also extend the period in which they endure 100+ hour work weeks to get the game out the door. With post-launch patches also likely in the pipeline many of these devs could be working debilitating hours deep into the new year. Games Journalist Jason Schreier tweeted that many of the developers were alerted to the delay via a group email that went out simultaneous with the statement's release.

The gap between Cyberpunk 2077 going 'Gold' and its release also implies there will be a hefty day-0 patch for console players to contend with. Hopefully the pre-load systems and servers will be up to the task.

It's an ill wind that blows nobody any good however. Activision, Ubisoft and other major publishers will be relieved that a competitor has cleared their own launch windows for titles such as Call of Duty Black Ops: Cold War and Watch Dogs: Legion, particularly on the consoles.