Mark this day in your calender ladies and gentlemen. Finally, after over two years of waiting, or 4 years if you're counting since the launch of the Battle.net Desktop App, or eight years from the integration of Battle.net 2.0 into the World of Warcraft game client and launcher, the Appear Offline feature is finally here. Rejoice ye faithful, rejoice!

Okay, that's maybe a little too flippant, but nonetheless an Appear Offline status flag - being able to play a Blizzard game without those on your friends list knowing and bugging you - has been one of the most requested features for Blizzard's social network app. Said app, known as the Battle.net Desktop App or Blizzard App, is a game launcher, storefront, and chat client combined, and has become mandatory for Blizzard's immensely popular suite of games. Absent the feature many players, especially those looking for a casual gaming session free of friend and guild pressures, found it to be more of a hindrance than a help in forging stronger relationships with the rest of the gaming community.

Of course, the latest update doesn't just include this long-awaited feature.

Our new Social tab is your one-stop-shop for managing all your various social interactions. Whether youre chatting with a friend or engaged in our new Blizzard Groups, youll easily be able to pick up where you left off in all of your conversations.

Blizzard Groups are a new way for you to connect with your friends and plan your next mission. Players can create and join Groups based on their common interests. There, they can keep in touch, share strategies, and catch up on conversations they might have missed while offline.

Each Group can have multiple text and voice chat channels, and Group administrators have a variety of tools to help manage membership, send out invitation links, and more.

The Groups beta is available now in the Americas region. Head to the new Social tab to get the party started! 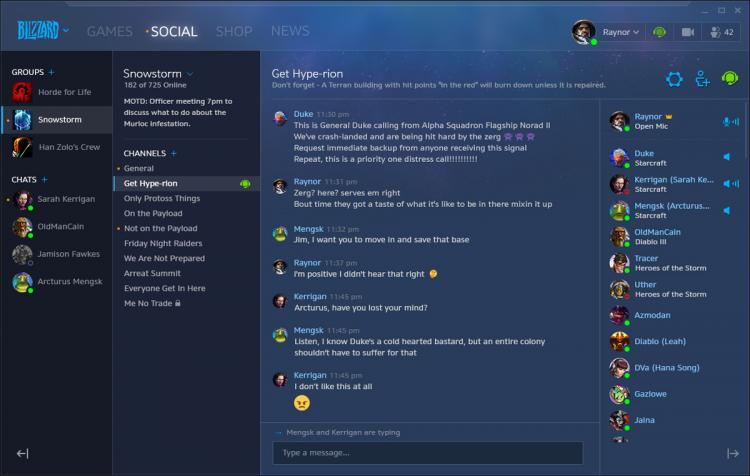 Let the Blizzard world know a little bit more about you by customizing your profile!

Your profile will allow you to select an avatar, share whats on your mind with an About message, add links to where people can find you on social media, and more! You can also view profiles of other players if youre curious about a pending friend request or what games a friend plays.

Players using the beta in the Americas region can customize their profile through the View Profile button in the app header and Friends List drop-downs.

Sadly the update isn't quite rolling out to everyone just yet. The new features are in a Beta phase and only available in the Americas region, so the rest of the world will have to wait. Users of the beta can submit their feedback here

Quite frankly, this update was almost inevitable since it was announced that Destiny 2 would be launching on PC and operating through Battle.net's infrastructure. It's highly unlikely that Activision or Bungie would have been happy with the game not having these and other advanced social features embedded in the client & launcher.