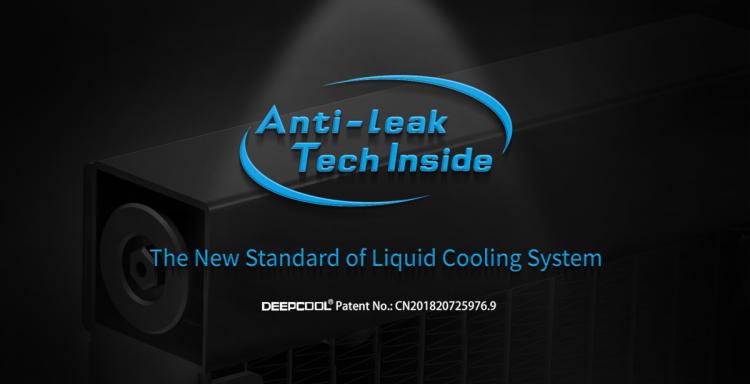 After three years of research and development efforts DEEPCOOL are today formally taking the wrap off a new patented system which they believe will help reduce the risk of leakage in closed loop liquid cooling systems. Dubbed 'Anti-Leak Tech.' (Patent No. CN201820725976.9), it utilises a novel pressure-relief system to maintain pressure equilibrium between fluid and gas pockets inside the loop and air outside the loop.


Read our review of the Captain 240 PRO with Anti-Leak Tech. Inside here!

Although thankfully rare, the damage which can be caused by closed loop cooler leaks is significant. In a worst-case scenario it's possible that multiple critical components can be rendered inoperable, at the very least incurring time and monetary costs. It's Deepcool's contention that utilising an automated pressure-balancing system reduces still further the chance of leaks, making their lack of inclusion in closed loop liquid coolers unsatisfactory.

Deepcool's Anti-Leak Tech. works primarily by fitting an elastic pressure-relief bag/bladder inside the radiator. The internal volume of the bag is exposed to the outside air, while the exterior of the bag is surrounded by coolant fluid. As coolant and gas pockets within the radiator heat and expand as components are placed under load, so the bag will be compressed freely and relieve the internal pressure. As a result, the cooling assembly itself (radiator and other components) does not expand to the point of leakage.

The pressure-relief bag is constructed from EPDM material manufactured by DuPont and possessing elastic, anti-corrosion, ageing-resistant and heat tolerance properties. Similarly, hose material is chosen for both elasticity and air tightness.

While innovative, it is notable that the solution introduces a new failure-point into the system: the seal between radiator and bag assembly. We trust that any increased risk down purely to this addition is rendered negligible by the solution's inclusion.

Deepcool's Captain 240 PRO is the first closed loop liquid cooler to utilise Anti-Leak Tech. inside. You can read more about the Captain 240 PRO here: http://www.gamerstorm.com/product/CPULIQUIDCOOLER/2018-09/1286_9557.shtml.