Der8auer, a world-renowned extreme overclocker and overclocking guru, calls out the existence of fake Thermal Grizzly Kryonaut thermal paste found at Amazon Germany. Der8auer is one of the endorsers of Thermal Grizzlys thermal grease and related products along with 8Pack. Der8auer calls out the fake product and made a statement on his Facebook page as quoted below. 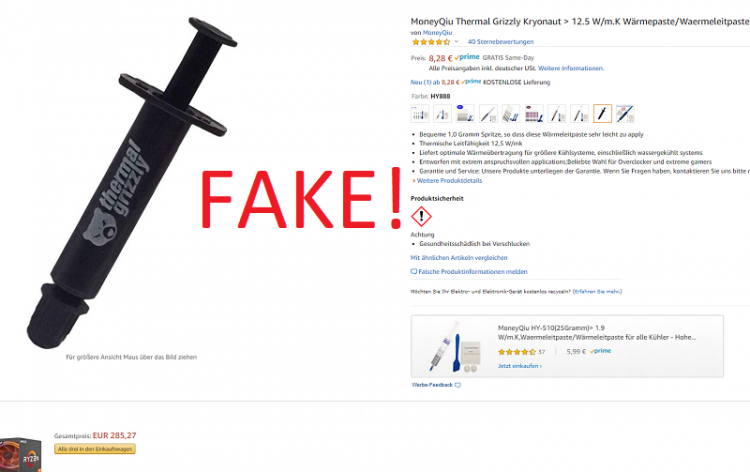 For the time being I would like to warn you shortly before the Amazon dealer MoneyQui. There fake Thermal Grizzly Kryonaut thermal compound is distributed as you can quickly see the text and the images. Unfortunately, many have fallen for it and have then reported to Thermal Grizzly. Of course, Thermal Grizzly does everything to stop the dealer, but until that happens you should only resort to authorized dealers.* - Der8auer
*translated from German to English via Google Translate

The seller is also found at Amazon USA and Amazon UK listing the same product and even having it sponsored or an advertised item. Unfortunately, there are already victims of the said fake thermal grease. Both the listings on Amazon Germany and Amazon USA are marked Amazons Choice making the matters worse as Amazons recommendation appeals to would-be buyers.

Thermal Grizzly listed their official distributors per region at thermal-grizzly.com. Like what Der8auer said, it is best to purchase at authorized dealers to ensure the authenticity of the product. Authorized dealers in the United Kingdom include Overclockers UK and Watercooling UK.

We reached out to Thermal Grizzly regarding this matter and will give an update once we heard from the company.