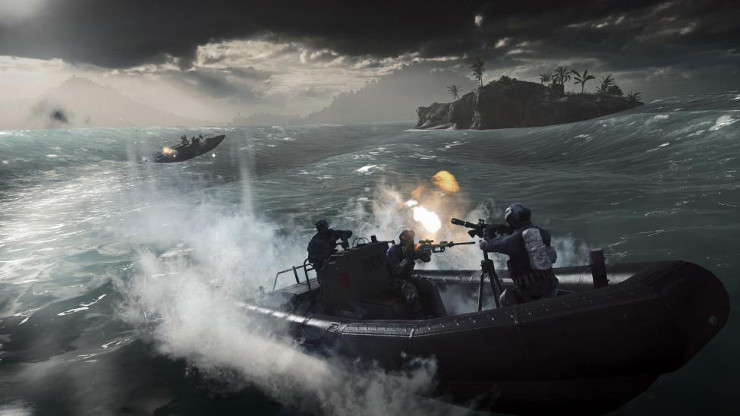 Yesterday DICE released their latest Battlefield 4 update, finally enabling the Mantle renderer. For the uninitiated Mantle is an API designed specifically to allow faster rendering on AMD Graphics Core Next GPUs and offloading some of the processing from the system CPU.

In a post on the Battlefield 4 Battlelog Frostbite Team Technical Director Johan Andersson described the purpose and value of Mantle. A 'low level API' (but not, as has been claimed, 'direct to metal'), Mantle serves to optimise CPU workloads in rendering by more effectively parallelising over multiple cores as well as streamlining GPU workloads. The benefit should be seen mainly in scenarios where the CPU would otherwise be a bottleneck, but should also serve to help when the GPU bottlenecks performance as well.

Andersson goes on to provide performance improvement figures for the game running on a variety of systems: one with an AMD Kaveri A10-7850 APU, another using a FX-8350 CPU & Radeon HD7970 GPU, and a third in an Intel Core i7 3960X configuration with two R9 290X GPUs. The systems represent the equivalent of a low-end gaming PC driven by a top-line APU, a high-end gaming rig, and an extreme gaming rig; in essence they're a fair cross-section of the systems used by those who will be interested in the update.

DICE's APU-powered rig sees an improvement of 14% in milliseconds/frame at 720p on Medium settings to 23.3 ms/f, representing 42.9 fps. Assuming this figure is relatively stable, that's a fairly reasonable performance level for a low-end gaming system and impressive for an APU. Andersson notes that Battlefield 4 is primarily GPU bound in this scenario, and may indicate that overclocking the memory (which has been shown to significantly improve APU graphics performance) may help further.

A boost of 25.1% is shown for the high-end gaming system under 1080p Ultra settings, elevating it to 66 fps. Andersson notes that here the scenario was primarily CPU-bound due to the use of 64 bots in their internal workload simulator, and should indicate the level of improvement expected under multiplayer conditions.

By far the greatest improvement to ms/f were seen with the deeply unrepresentative extreme gaming rig, which saw an improvement of 58% to 8.38 ms/f (~119 fps). It's noteworthy that in control testing this system utilised Windows 8 and DirectX 11.1, the fastest rendering option prior to Mantle. Previously Battlefield 4 was CPU bottlenecked, and remains so under Mantle even if it was eased somewhat.

The blog post is well worth a read in its entirety, but the gist is that raw performance improvements with Mantle are significant and development on the API is ongoing within both DICE and AMD end. Isolated performance figures should however always be taken with a pinch of salt as the factors which go towards a good gaming experience are more complex than raw numbers would suggest.

Note that in the fullness of time all new titles which utilise the Frostbite engine should be compatible with Mantle, allowing AMD graphics card users to see significant improvements over the competition for 'free'.

Unfortunately it's not all good news for AMD. The Catalyst 14.2 driver update, which should enable Mantle on select GCN systems, has been delayed to at least midday today US-time due to the last-minute discovery of a major bug.

Furthermore only four GCN GPUs are compatible with the first iteration of Mantle: the R9 290, R9 290X, R7 260X and R7 200-series on Kaveri APUs. Although DICE has performed tests with the HD 7970 (AKA R9 280X) AMD is apparently still ironing out yet more issues with this older generation of cards.

Although it will cause consternation amongst some enthusiasts it's far better for AMD to get any glaring problems ironed out before pushing an official release.