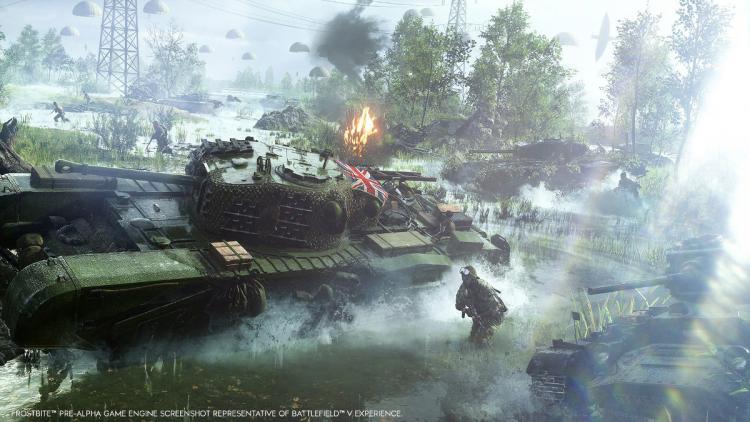 EA DICE's Battlefield is a bi-yearly highlight franchise for PC FPS gamers, and the latest installment is due in just a few weeks. In order to prepare fans ahead of release EA have published Battlefield 5's PC system requirements, encompassing minimum, recommended and 'DXR-necessary' specifications.

EA's Frostbite 3 engine has a reputation for scalability, offering decent performance to a wide range of systems with a few tweaks to in-game settings. Such remains the case here as the minimums are modest and go back a few generations. In terms of GPU you'll only need a GeForce GTX 1050/GTX 660 or Radeon RX 560/HD 7850 as a point of entry, which wasn't too terrifying even when they were 'current' hardware. Memory and Storage requirements aren't too high either, although you may need to clear some space on your SSD if that's a preferred medium.

Hang on, did we say not too terrifying? On the CPU side DICE recommend the Intel Core i5-6600K as a minimum. Given that a quick peek at the recommended specs suggests an AMD Ryzen 3 1300X, it does seem like this is a mistake or misprint. Older generation Intel quad-core CPUs are likely fine (going back as far as the i5-4670K), but probably not dual-core chips. This could be a particularly challenging title for some laptops you'd be otherwise happy gaming on.

Recommended specifications meanwhile move comfortably into the window of modern gaming hardware. The biggest hurdle many systems won't live up to is a need for 16GB RAM, but a GeForce GTX 1060 or Radeon RX 580 aren't quite as difficult to live up to as they were just six months ago. CPU recommendations remain modest: just an AMD Ryzen 3 1300X or Intel Core i7-4790K (the latter of which is now five generations old).

It's no surprise that the minimum GPU necessary for Battlefield 5 DXR is the GeForce RTX 2070, NVIDIA's entry-level RTX GPU. What may come as an unwelcome shock however is the stipulation of an AMD Ryzen 7 2700X or Intel Core i7-8700K. Eight and six-core CPUs (with simultaneous multi-threading/hyperthreading) respectively, it's indicative of a need for much more meaty CPU processing requirements for DXR threads than many might have expected. DXR will also require Windows 10 with the v1809 October 2018 Update installed.

Hopefully there's no sting in the tail for any of you with these requirements. If upgrades are necessary there's still some time to splash out; Battlefield 5 isn't due until November 20th, when it will be available in-store or online at EA.com.