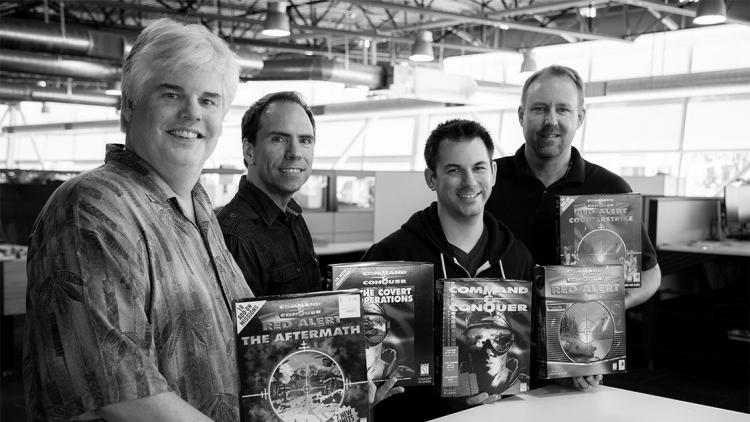 Earlier this month Activision Blizzard announced a remaster of RTS classic Warcraft 3, a game not only great in its own right, but which also set the stage for World of Warcraft and provided the building blocks for the entire MOBA genre. Rivals EA also have plenty of classic titles in their locker itching for a re-master, but none are as well-loved as the Command & Conquer franchise.

So, with relief and enthusiasm fairly dripping from their words, it was revealed today that EA are indeed working on a remaster of the original title Command & Conquer: Tiberian Dawn, Command & Conquer: Red Alert and their key expansion packs. EA have partnered with Petroglyph Games on the project, a studio which boasts many of the developers who worked on the original games as part of the now defunct Westwood Studios.

The final cherry on top is that the audio will be remastered by original composer Frank Klepacki.

C&C Remastered, it seems, will be sold as a single remastered collection, retaining the 'buy it once' principle that has gone to the wayside in recent years. Currently there's no information on release date, and we infer from their comments that there's a long road ahead before a remaster will be in the hands of fans.

The statement by Jim Vessella, Creative Director at EA, is reproduced below.

A month ago, we let the Command & Conquer community know we were bringing the franchise back to the PC, starting with a remaster initiative. The reaction from fans has been amazing, with many of you sharing your favorite C&C moments from the past 23 years. We have been reading these comments and listening intently. And now, we are ready to reveal our first PC offering and how your suggestions are already influencing our approach.

Today, Im thrilled to tell you we are going back to the beginning. We have decided to remaster Command & Conquer: Tiberian Dawn. And while this is incredibly exciting on its own, were also aware of how passionate the community is about the Red Alert universe. So, we will also remaster the original Command & Conquer: Red Alert. But what about the classic expansion packs you may ask - Covert Ops, Counterstrike, and Aftermath? Well, C&C and Red Alert wouldnt be the same without them, so all three expansion packs will be bundled with the base games into one remastered collection - without microtransactions.

In addition to the excitement and support of this remaster initiative over the past month, there has also been a healthy skepticism that we can pull this off. How are we possibly going to remaster these titles while maintaining the authenticity of the original experiences? Bottom line, there is no better way to achieve this than to partner with some of the talented developers who brought these original games to life.

So, after years of the fans asking for their involvement, I am humbled to announce that EA is going to partner with Petroglyph Games to develop the C&C remastered collection.

Petroglyph Games includes many of the original developers from Westwood Studios, and some of the most influential members of the original Command & Conquer development team from 1995. Joe Bostic is known as the co-creator of C&C, having also served as the Lead Programmer on Tiberian Dawn and Red Alert. Steve Tall joined Joe as a Lead Programmer on Red Alert, and Mike Legg contributed to all forms of audio systems at Westwood, having been an employee since 1986! All three members helped start Petroglyph Games in 2003 after the closure of Westwood and are joined by a veteran group of RTS developers from the past 15+ years. And dont think we havent noticed the #1 request from the community in all the comments from the past month... You want Frank Klepacki. So as a cherry on top for the fans, we are thrilled to announce that Frank will be re-joining Petroglyph Games to be our Composer and Audio Director for the remaster collection!

On a personal note, I can tell you the past few weeks have been surreal. During my first visit to Petroglyph, I was able to brainstorm C&C feel with Joe, sit with Frank and hear him recite Commando lines, and gab with Steve about whether we should fix the Tib Dawn Harvester AI. Getting to chat C&C with the original developers has been one of the highlights of my gamer journey, and I cant wait for all the incredible conversations to come.

In addition to the fantastic team at Petroglyph, we will also be partnering with Lemon Sky Studios to help bring these original games to 4k glory. Lemon Sky is one of the premier art studios around the world, with a unique specialty in remastering classic RTS titles. After meeting their team and hearing their passion for C&C, we are incredibly lucky to have them team up with Petroglyph to develop the highest quality C&C possible.

The exciting part is that we havent started development yet. The community is literally getting in on the ground floor of this project and have every opportunity to help influence how we build this remastered experience. Please continue to engage on Reddit and community channels and help us create the best possible remasters of C&C and Red Alert!