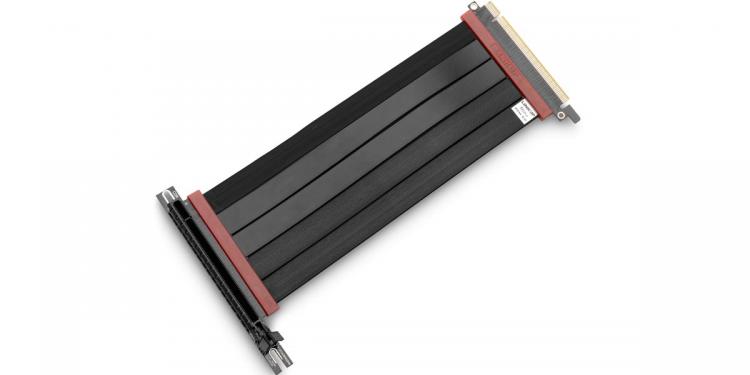 EKWB launches a stand-alone PCIe 4.0 X16 riser cable compatible with all modern motherboards including Z590, Z690, X570, and B550 chipsets. The EK-Loop PCI-E 4.0 Riser Cable has been tested on both AMD Radeon RX 6000 series graphics cards and NVIDIA GeForce RTX 30 series graphics cards. Offering true PCIe 4.0 bandwidth, the riser cable is also 100% compatible with the PCIe 3.0 standard of older-generation motherboards. The riser cable has a 90° connector with a latch and a 200mm length.

EK-Loop PCI-E 4.0 Riser Cable  200mm
This high-speed 4.0 GPU riser cable features improved individual PCIe laneway shielding that blocks unwanted external EMI/RFI and interference between channels. EK-Loop PCI-E 4.0 Riser Cable is designed to match the PCIe impedance differential of 85 ohms. Signals that are traveling between the motherboard and the GPU are matched at the proper frequency without any capacitors in the cable that would introduce a potential point of failure and result in a less compact riser.

4-layer PCB with gold-plating was chosen for the best signal integrity and lifespan of the product. It was engineered with heavy-duty PCB/cable junctions to ensure increased durability. It is 200mm long and easily bends thanks to the flexible shielding of its wires. Flexibility comes extremely useful in tight-fit scenarios like small form factor (ITX) cases, where it truly shines. It has a 90° right-angle connector with a latch.

Pricing and Availability
The EK-Loop PCI-E 4.0 Riser Cable is now available on the EK webshop for $69.99 MSRP.

There are currently 745 user(s) online:
Google