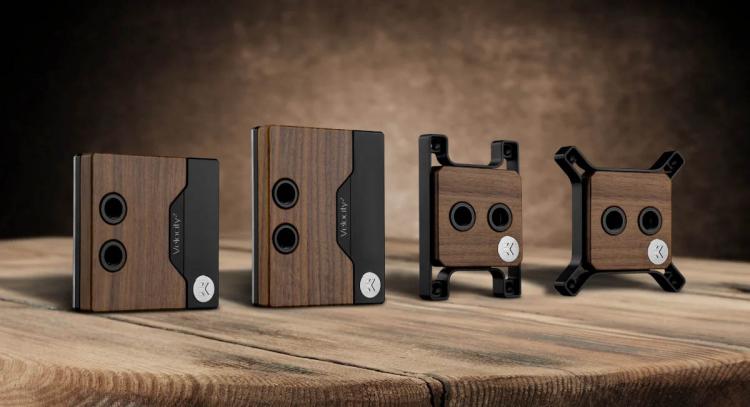 Embedded in the Velocity² is a next-generation EK CPU water block cooling engine that is socket-specific. A combination of mounting pressure and cold plate geometry, tailored for the IHS and die layout of each specific CPU platform, is used to achieve low hydraulic flow restriction and high performance. The lathe-turned cold plate is made with precision to cover the IHS effectively and put optimal pressure on the die area.

EK-Quantum Velocity² was redesigned inside and out. A new, patent-pending EK-Exact Mount mounting system was developed in the search for an easy-to-use but the aesthetically pleasing mounting mechanism. It consists of only three pieces  the backplate, mounting screws, and the water block itself. Its screwed in from the back, allowing for a seamless and clean front aesthetic without any screws disrupting the harmony of shape.


EK-Quantum Magnitude is bearing the prestigious iF Design award for the bold and different approach to the CPU water block mounting mechanism. Differentiated from any mounting structure of a water block that is usually a black and mundane plate, the design accentuates an integrated three-dimensional X- or H-shaped frame with premium finishes that firmly cradles the main body in place, while the screws are morphed into sophisticated design details.

Specialized manufacturing techniques were deployed to create this truly unique product. Not a single Magnitude component was made using mass production techniques. Instead, every single piece was CNC-milled separately out of a solid piece of material. At the heart of Magnitude lies the CNC-machined solid brass insert. This component made it possible to significantly enlarge and optimize the cooling engine.

Compatibility
EK-Quantum Velocity² and Magnitude series CPU water blocks are socket-specific, compatible only with Intel LGA 1700 or AMD AM4 socket.