Hamburg, 13th of August 2012. Enermax power supplies are unchallenged long runners. They power your PC over long years stably and reliably. How many end users trust in Enermax, turned out during the Long Runner Contest: A huge number of end users from all over Europe took part and sent in photos of their Enermax powered systems. The oldest still operating PSU from Enermax is a 20 year old E200P-T. According to the serial number, it has been produced in 1992. The owner of this nostalgic device, Marcin Mrozowski from Poland, comments: The well-thought design, the high-quality and durable components, especially the premium capacitors, allow for a reliable operation.

Visit the photo gallery with all Enermax long runner PSUs at Facebook. 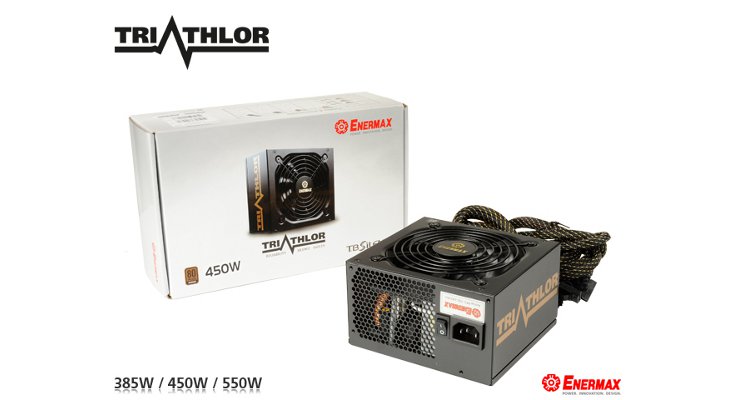 With the Triathlor series, Enermax now presents the next long runner generation. As usual, the premium quality manufacturer emphasizes durable and high-end components as well as a technological design that complies with the requirements of latest and forthcoming system components. A rarely seen solution for 80 PLUS® Bronze PSU is the application of an elaborated DC-to-DC circuit: The secondary 5V and 3.3V voltages are generated by the 12V rail in order to minimize energy losses, ensure a clean output voltage and perfect voltage regulation.

Apart from that, the DC-to-DC technology enables the  Zero Load Design. Even at 0W load, the Triathlor power supplies maintain a stable system operation. Many end users experience compatibility issues when they activate the energy-saving functions of latest CPU and graphics cards like the C6 state. With the Zero Load Design, these problems are things of the past. Triathlor power supplies are real endurance athletes  over the full load range from zero to 100 per cent load.

Due to its massive 12V rails, that can deliver more than 98 per cent of the total PSU output power, Triathlor is an optimal choice for systems with high-performance or overclocked processors and graphics cards. From 450W upwards, two 8P PCI-E connectors are a standard feature of the Enermax PSU, completed by numerous SATA and 4P Molex connectors. Until the end of October, the manufacturer will further extend the Triathlor series with three models with modular cable management. The Triathlor FC 550, 650 and 700W come with flexible flat modular cables that unease the cable routing inside the case.

The cooling system of the Triathlor power supplies relies on the proved Twister Bearing Technology that is known for its durability and smooth operation. Enermax applies the most popular T.B.Silence 120mm fan with its characteristic Batwing Blades. Furthermore, the manufacturer improved the speed control of the PSUs: Below 50 per cent load, the fan runs with virtually inaudible 500 RPM.*

The Triathlor models with 385, 450 and 550W are now available. Until the end of October, Enermax will launch another Triathlor version for professional system builders with 300W and the modular Triathlor FC power supplies with 550, 650 and 700W.

For more information on the Triathlor series of PSU, or other Enermax power and cooling products, visit Enermax.co.uk