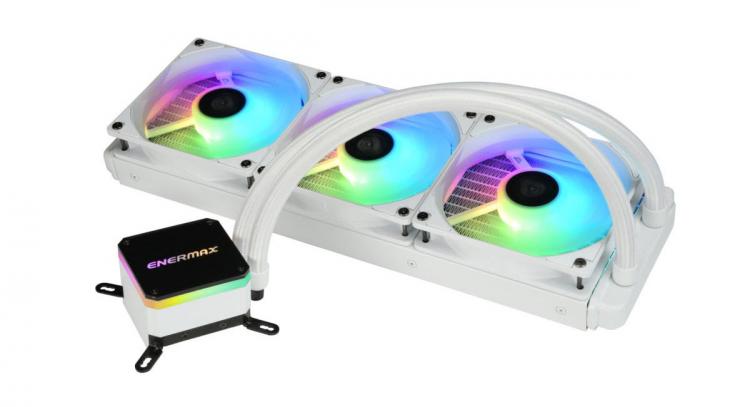 ENERMAX announces the new LIQMAX III ARGB 360 White edition in Europe. The new model comes with a white radiator, pump section, and RGB fans with a white frame and blades. The ENERMAX LIQMAX III ARGB 360 White is designed to support motherboard RGB sync technologies. A separated controller for stand-alone use is included in the delivery. The three fans and the water block provides vibrant ARGB lighting with spectacular rainbow effects.

The ENERMAX LIQMAX III ARGB Series features the patented Dual-Chamber Design which isolates the pump from the heated coolant, extending the life of the cooler. The cold coolant enters the first chamber with the pump inside and is then forced through the cold plate absorbing heat. The heated coolant is collected in the second chamber and then transported to the radiator for cooling.

The Central Coolant Inlet (CCI) injects coolant in the middle area above the CPU and distributes it evenly across the cold plate using the patented Shunt Channel Technology (SCT). The result is a shorter coolant flow path and faster heat transfer. The cooler's Aurabelt water block of LIQMAX III RGB is equipped with RGB LEDs designed for synchronization with RGB motherboards from ASRock, ASUS, GIGABYTE, and MSI.

There are currently 356 user(s) online:
Google