Are you a hoarder of old computer technology? Were you a fan of EVGA products back in the day? If so, then you could have a cool $1000 in 'EVGA Bucks' waiting to be redeemed.

The US-based PC component manufacturer are offering their very own miracle this Christmas for those still in possession of an EVGA GeForce 4 ACS or ACS2-cooled graphics card. These cards, which were a precursor to the modern cooling solutions currently available on EVGA's GPU lineup, now have a bounty on their head:

It's quite simple, if you have one of these graphics cards today, EVGA wants it and will pay you 1,000 EVGA Bucks for it! This Miracle is available for a maximum of 3 ACS owners and 3 ACS2 owners. Just be one of the first 3 registered owners of either card to submit your information to participate in this exchange! 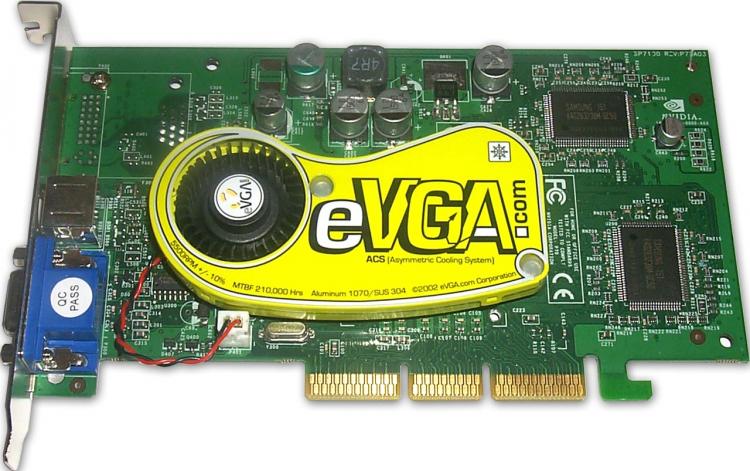 Although EVGA Bucks can't be redeemed for real money, they do have a equivalent value of 1 USD or 1 Euro within the EVGA online store. Thus, by being one of the first to register your serial number at EVGA.com, you could take away a GTX 1080 Ti, or a couple of GTX 1070 TI's, or almost whatever else takes your fancy.

The Asymmetric Cooling System, known as ACS and ACS2, were early versions of GPU coolers with a directed hot air exhaust flow AKA 'Blower', before the advent of more elaborate OTES designs. Fans were offset from a GPU, and air was driven through heatsink fins in a more compact but still familiar methodology. The second iteration utilised heatpipes to transport heat from additional components, clearing indicating the direction the technology was going towards both larger heatsinks and active cooling of more critical zones.

More information on this promotion can be found at https://www.evga.com/articles/01177/evga-christmas-miracle/. Don't forget though, only the first three registration of each version can be winners.

Assigned tags:
evga
Please share your thoughts by commenting below!