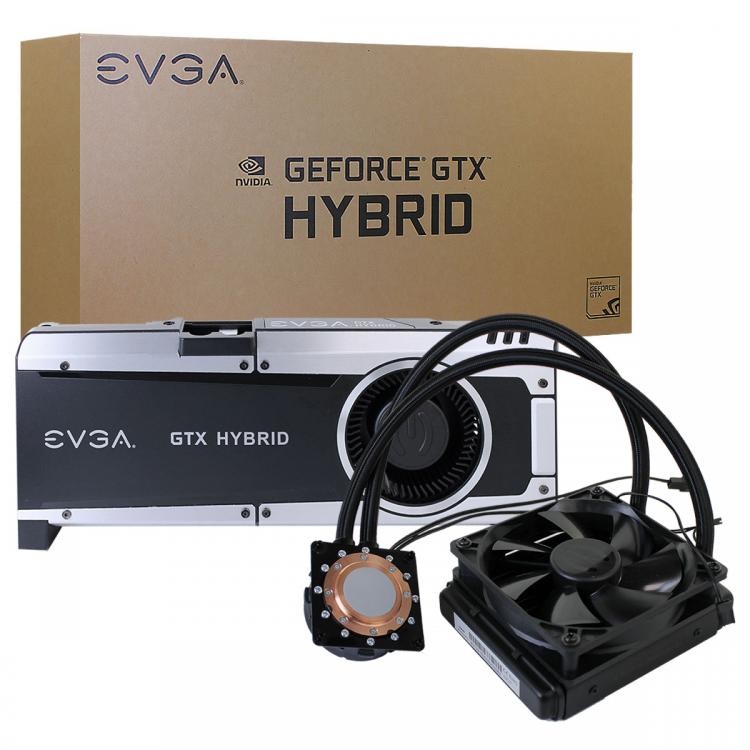 This comes as an update to the article from earlier, but EVGA has announced and released their hybrid all-in-one cooling solution for reference design GTX 1080 and GTX 1070 cards. As previously expected, the cooler is compatible with all reference designs from any card manufacturer. The cooler also fits EVGAs ACX model cards.

The overall design of the cooler is fairly standard for all-in-one hybrid cooling solutions, with a liquid cooling block sitting atop the GPU and the rest of the card being cooled by a single blower fan and heatsinks within the coolers plastic shell. Like with other similar hybrid solutions, the liquid loop contains a single 120mm radiator and fan. The tubing is encased in a glossy black braid.

The cooler is the one that was teased in the images from early June, with a sleek black and silver design that has a bit of an industrial feel. It looks a great deal like the design used for EVGAs GTX 980 Ti hybrid. The inlet and outlet ports are on the side of the enclosure, and both the side and bottom of the card feature the words, EVGA GTX Hybrid, in silver. It would have been nice to see a backplate included with the cooler, but since its not usually a standard feature, its understandable why it wasnt.

The cooling kit is currently available directly from EVGA in the US at http://www.evga.com/Products/Product.aspx?pn=400-HY-5188-B1 for $119.99. It doesnt appear to be available through their European site just yet. The price seems to be in line with similar coolers, but it does offer the convenience of coming in a single package with setup instructions.

EVGAs GTX Hybrid cooler offers a degree of flexibility for GTX 1080 and GTX 1070 users who may be considering a switch to hybrid cooling in the future. This is especially true for GTX 1070 users, since there werent any hybrid options for them until now.