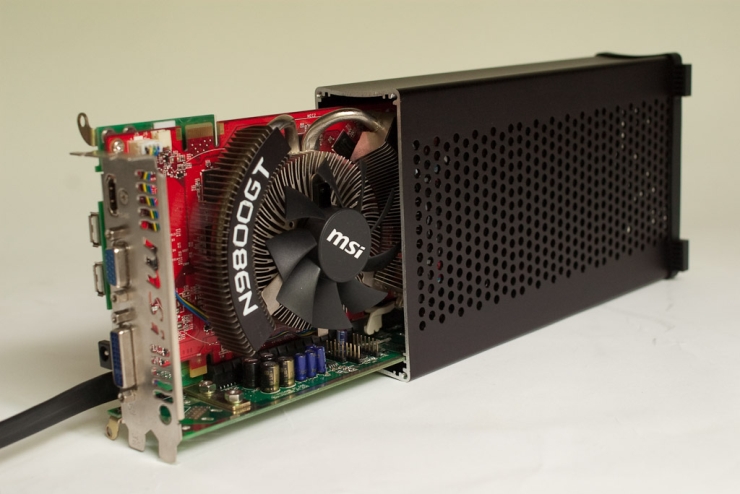 An ExpressCard ViDock For GFX

Thunderbolt, Intel and Apple's new high bandwidth interface for connecting external devices, has been much maligned since it was unveiled as part of the MacBook Pro line in February. Expensive and something of a white elephant to the mainstream consumer were frequent charges, but that's perhaps a little unfair for a standard which could still turn out to be terribly important to portable computing.

Village Instruments have for some time been a player in external PCIe card enclosures for laptops with an ExpressCard interface via their ViDock family of products, including a capability for high-power GFX cards of up-to 225W, but are obviously somewhat limited by the 5Gb/s bandwidth of ExpressCard 2.0. Thunderbolt by contrast has 10 Gb/s bi-directional bandwidth and a long-term developmental progression path laid out pushing it to 100Gb/s over 10 years, relieving if not quite removing one bottleneck to external GFX. Intel should be rolling out a Thunderbolt option as part of Ivy Bridge some time next year too, at which time we'll really be able to see whether Thunderbolt has consumer demand backing it. Combined with Apple's commitment to Thunderbolt in all their MacBook and iMac product lines, that'll be a whole lot of portable devices that may want to see high-performance graphics as a modular option when the user is back at home base.

Last week the Village Instruments CEO, Hubert Chen, published an open letter on Facebook probing the Mac Community for their opinions on a Thunderbolt ViDock by asking 4 key questions:

He wasn't convinced there was a market, but if they could gather 50 responses they'd move it into development. Chen got the response he needed, and 250 more besides.

A Thunderbolt-enabled ViDock is now in development, with a definite eye towards GFX coupled with additional added value; VI can't be the only company with this particular iron in their fire. Gaming that demands high-end hardware, seen as a major weakness of laptops in general and Apple products in particular, may finally prove to spur the demand for Thunderbolt that until now had been niche. It will be a while before such an enclosure comes to market, but if and when it does portable low-power laptops with discrete modular graphics could be the future of high-end laptop gaming.