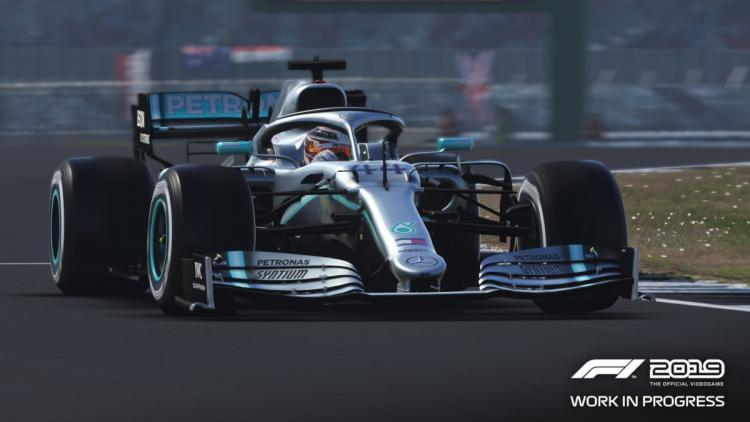 Patch 1.07 for Codemasters' driving sim F1 2019 by has just dropped, and with it comes support for an unlikely pair of technologies from the two rival GPU manufacturers AMD and NVIDIA: NVIDIA Deep Learning Super-Sampling (DLSS) and AMD FidelityFX. This marks the first appearance of the two in the same game, and one of the first outings for FidelityFX in a mainstream Triple-A title since its unveiling alongside the Radeon RX 5700-series in July.

NVIDIA DLSS, part of the RTX suite of technologies, has been adopted by a handful of game developers as a means of extracting higher performance in graphically demanding games, particularly those which also leverage real-time hybrid ray tracing. Although not strictly an upscaling tool, current implementations of the technology in practice utilise deep learning inferencing techniques to upscale from a rendered resolution to the display's native resolution while seeking to preserve overall image quality. A proprietary technology, it requires an NVIDIA GeForce RTX 20-series GPU.

New to the table is FidelityFX, AMD's new open-source toolkit billed as an alternative to some of the proprietary technologies NVIDIA make available to games developers. FidelityFX debuted with the Radeon RX 5700-series and Radeon Software Adrenalin 2019 Edition 19.7.1 drivers, and is currently exclusive to GPUs utilising AMD's Navi architecture (although some features may eventually be made available to older Radeon graphics hardware).

A major aspect of FidelityFX is Contrast Adaptive Sharpening, a post-processing technology that sharpens details of images made softer by previous steps in the rendering process, particularly certain anti-aliasing methods such as TAA. It also has built-in optional upscaling support, and critically boasts a relatively low performance cost.

It's likely that the 'FidelityFX Upscaling' and 'FidelityFX Sharpening' in the F1 2019 1.07 Patch Notes separately refer to these two aspects of CAS. In theory CAS can be supported on any GPU, but at this point in time only the RX 5700-series has the necessary driver hooks available.

Codemasters have opted to utilise FidelityFX Upscaling and Sharpening in F1 2019 as discrete image quality options alongside DLSS, in a move which some interpret as pitting NVIDIA DLSS and FidelityFX Upscaling against one another in competition. Given that DLSS is often criticised as a 'blurry upscaling technique' amongst those inclined towards hyperbole, it will be interesting to see a direct comparison made between the two.

F1 2019 Patch 1.07 is available for download now through the usual Steam update paths.