Yes you read that correctly. GTX 680 owners can get a 38% performance increase on Far Cry 3 with these drivers. Other cards also see a good increase. 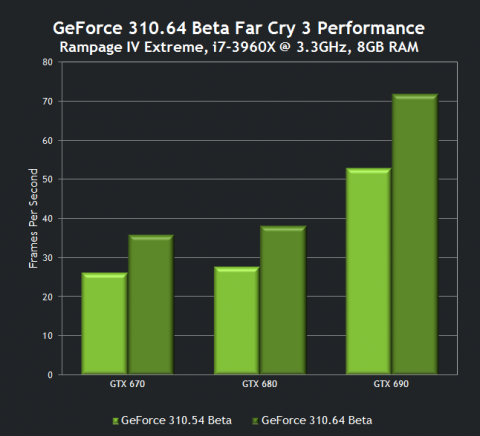 With Far Cry 3 coming soon depending on where you are, these drivers are well worth the download! However, if Far Cry 3 is not your thing you will also see performance gains in Black Ops 2, Assassin's Creed 3, Battlefield 3, Skyrim and Batman: Arkham City just to name a few.

Using the most popular gaming resolution, 1920x1080, we maxed out Far Cry 3's many graphics options, selected SSAO Ambient Occlusion (an excellent balance between performance and fidelity), set the game's version of Transparency Supersampling to "Standard", and enabled 8xMSAA to eliminate those pesky jaggies. As you can see below, today's 310.64 beta driver boosted performance significantly, helping the GTX 670 and GTX 680 achieve playable frame rates at this demanding detail level. Please note that we expect improvements of varying degrees to be seen on any system utilizing a GeForce GTX 400, 500, or 600 series GPU, but due to time constraints we were unable to run comprehensive, in-depth tests ahead of the driver's release.

The drivers can be downloaded from here.

« Intel Post-Haswell CPUs To Be Soldered Onto The Motherboard? · Far Cry 3 performance boost just one of the features of the latest GeForce Beta driver · Sharp's first 4K 32-inch IGZO LCD is destined for Japanese workstations »