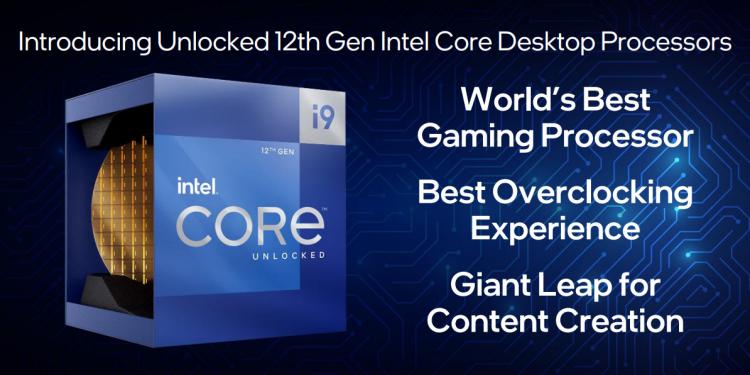 Change is afoot in the desktop PC space driven by the architects behind the most dominant CPU architectures of the past 20 years. Strong competition and widespread company turmoil after a period of complacency has prompted a radical new architectural approach, the introduction of new technologies, and a forthright rebuttal to the idea that they were finished on desktop. Yes, Intel is back, and this time they're taking no prisoners.

Alder Lake is described as the most significant shift in x86 architecture since the introduction of Core CPUs in 2006. Envisioned as a highly scalable architecture for diverse platforms from Ultramobile to Desktop, it implements a style colloquially known as big.LITTLE which combines high performance and high efficiency cores onto a single silicon die. By leveraging improved thread management to balance load optimally across these cores, the platform as a whole can more readily adapt to varied performance requirements; varying the number of each core on a processor offers that scalability needed.

Launching alongside Alder Lake desktop CPUs are Z690-series motherboards equipped with overclocking and tuning features, and DDR5 memory incorporating new customisable XMP 3.0 profiles. PCI-Express 5.0 also debuts with this platform, doubling bandwidth compared to PCIe 4.0 ahead of new components expected to arrive in the near future. 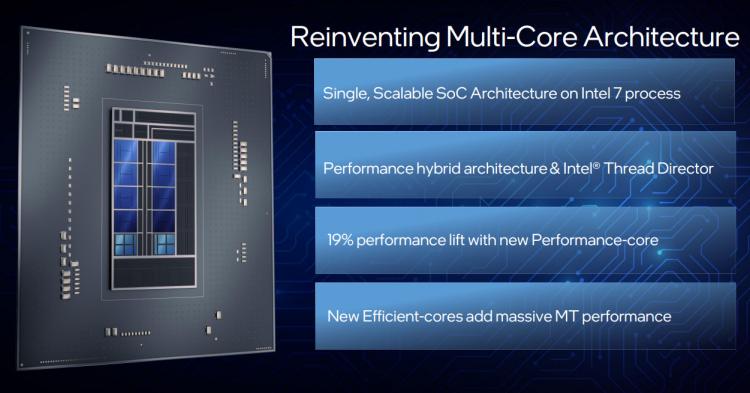 Desktop processors and CPUs will go on sale through retail channels, OEMs and System Integrators from November 4th. Reviews will be unavailable until that time, but we still have a lot to share with you today.

Intel's aren't kidding when they assert that this is a massive overhaul of the well-established x86 architecture. Even AMD's introduction of the Chiplet processor style wasn't so far reaching, nor requiring of such significant OS-level updates to make thread schedulers aware of the new paradigm. It remains to be seen whether big.LITTLE has a long-term future, but all the big names are betting that it does. 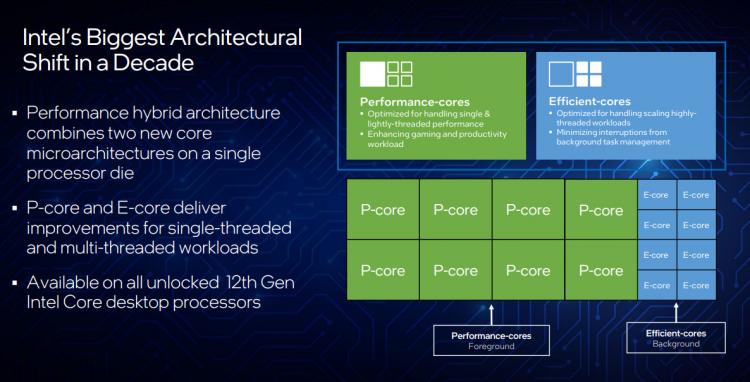 The core components of Alder Lake are Performance and Efficiency cores, or P-cores and E-cores in shorthand respectively. Each is optimised for different workloads and markedly different performance characteristics, including operating at different frequencies and indeed at different times.

P-Cores are optimised for single and lightly threaded performance. They enhances Gaming and Productivity workloads and feature an implementation of Intel Hyperthreading to support up to two independent threads simultaneously.

E-Cores are optimised for scaling highly threaded workloads, offloading from the P-core where necessary. They only support a single thread, with key usage cases that include minimising interruptions from background tasks.

The performance criteria of both cores can be adjusted when an unlocked 12th Gen Core CPU is paired with one of the new Z690 motherboards, but will largely be left to do their own thing otherwise. The number of P-cores and E-cores will vary greatly by processor SKU, with up to 8 P-cores and 8 E-Cores available on the flagship Core i9-12900K/KF. 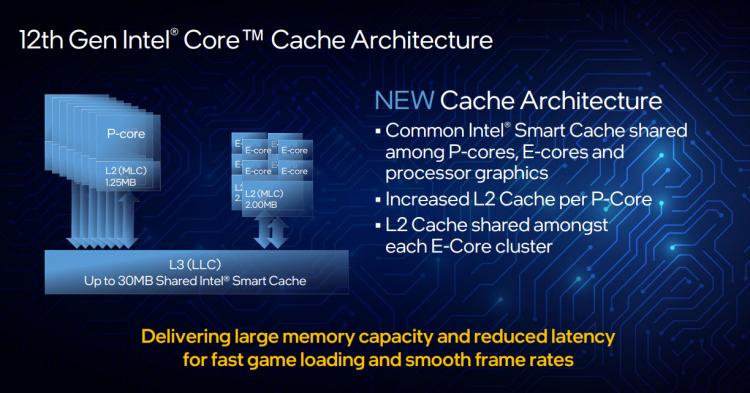 AMD heavily leveraged cache design and size to improve Zen 3 performance and paper over some of the weaknesses of chiplet architectures, and Intel aren't shy about aggressively adapting cache to big.LITTLE either. The goal is improving the ever-important Instructions per Clock (IPC) metric, something they sorely need after giving up ground in the previous generation.

Compared to 11th Gen Rocket Lake cores, Alder Lake P-Cores have a significantly increased L2 cache that's up from 512KB to 1.25MB (2.5x). This cache is reserved for the core and not shared, acting as a mid-level cache (MLC). It's different for smaller cores - a L2 pool of 2MB is shared between a cluster of up to 4 E-cores, helping with that strong multi-threading requirement.

Acting as a last level cache (LLC) is a pool of up to 30MB of L3 cache, almost double that available to the 8-core i9-11900K. Taken in totality, this represents a much more complex cache design (requiring far greater die area) than the prior generation, implemented on a single die but without the downsides of increased latency due to the CPU being spread across two chiplets (as in Zen 3).

Intel are, through Alder Lake, reclaiming desktop leadership in the cutting edge performance I/O by supporting the latest PCIe 5.0 standard. Each processor supports up to 16 lanes of PCIe 5.0 signalling off the CPU for discrete graphics and storage, doubling the theoretical bandwidth to 32GT/s per lane (or ~63GB/s bi-directional on a 16-lane interface).

Support for this feature comes ahead of new PCIe 5.0 devices just as Zen 2 arrived ahead of PCIe 4.0, but new OS features such as DirectStorage may make transitioning from PCIe 4 to 5 more swift than anticipated.

The 12th Generations CPUs are manufactured using the Intel 7 process, an optimisation of their 10nm lithographic technology. The LGA1700 package is larger than LGA1200 and requires a new CPU mounting kit when retrofitting a current generation CPU cooler, taking account for the thinning die and potentially changed recommended mounting pressures. 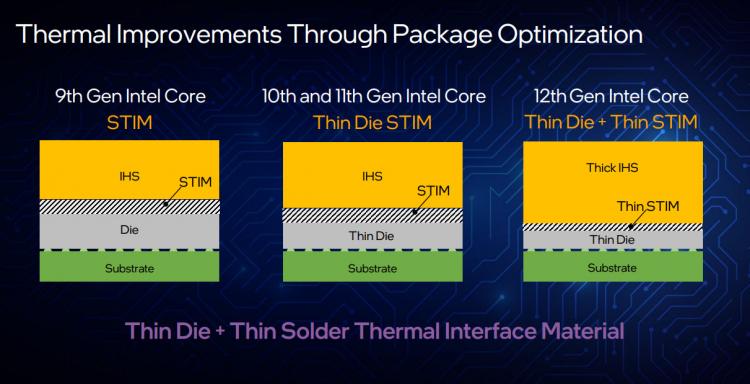 A thinner die and soldered TIM should also aid with overclocking by retaining less heat and more readily conducting it to the IHS and cooler heatsink. Larger and more elaborate cooling solutions will likely be of more benefit, particularly when opting to run with slower fans and lower noise thresholds.

Also debuting with Intel 12th Generation CPUs is the new DDR5 memory standard, bringing with it much higher transfer speeds and more complex on-DIMM functionality including load balancing and error checking. XMP is also getting a revision to v3.0, allowing the storage of more profiles and some consumer-level customisation of these profiles (including naming) through software tools supplied by memory vendors such as CORSAIR. 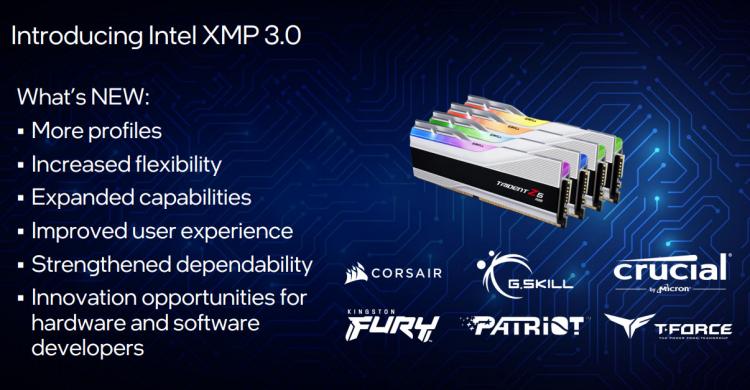 Intel Dynamic Memory Boost Technology is also being introduced with this platform, serving as an automatic overclock for validated DDR5 memory. While not quite as complex as CPU Turbo Boost, it does allow the memory controller and DIMM to switch between JEDEC standards and XMP 'overclocked' profiles as and when the performance headroom is required.

And of course DDR5 also increases the per-DIMM capacity significantly, to the extent that 64GB configurations may soon be as common as 32GB systems are today.

Interestingly however, Intel aren't cutting ties with DDR4 just yet. It won't be a surprise to see DDR4 SODIMMs crop up in mobile and low-cost systems, but less expected will be a raft of DDR4-compatible 600-series desktop motherboards (including Z690 models) shipping from day one. This may be partially intended to mitigate against the cost and low availability of new DDR5 DIMMs, but don't expect to see motherboards supporting both standards at once.

Unlocked Alder Lake processors will support DDR5-4800MT/s and DDR4-3200MT/s in standard configurations. Motherboards meanwhile will ratchet this up in overclocked modes to support up to DDR5-6800MT/s. Timings, however, are the great unknown when it comes to DDR5.

To make the best use of Alder Lake's big.LITTLE architecture the OS Scheduler needs to be aware of the capabilities and current load of each individual core, be they a P-core or an E-core. Something similar has been implemented in the past with thread affinity and processor feedback of the strongest core on a CPU, but the new architecture takes it to a new level.

Helping Windows 11's scheduler with this task is Intel's Thread Director. It monitors each cores of the CPU in realtime (nanoseconds), providing feedback to the OS Scheduler on where to assign new threads based on thermals, operating conditions and power settings. No user input is required, but it will have enormous implications for processor performance.

We have a little longer to wait before we see independent reviews and hence the full picture on Intel's 12th Generation performance, but the blue team are understandable bullish on what we can expect for the processor family's overall performance. 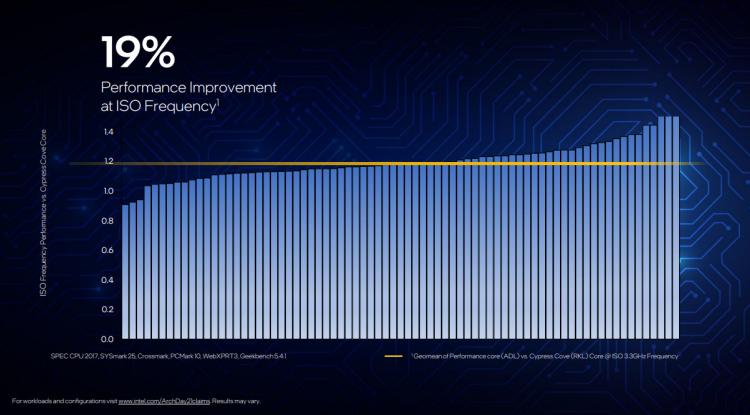 Comparing an Alder Lake P-Core with Rocket Lake's core has the former outpacing the latter by huge levels - an average of 19% across games for instance. But where the 12th really starts to pick up the pace is in multi-threaded workload applications, where background, less demanding or low-priority tasks can be picked up by the E-cores so the P-cores can be fully leveraged. One example given is where a game is being streamed while played, resulting in a huge 84% improvement for the i9-12900K over the i9-11900K.

Intel believe that they can leverage the higher IPC of the P-Cores with better overall multi-tasking capabilities to comfortably surpass both their prior generation and even AMD's 16-core Ryzen 9 5950X across all workloads. Figures from 15-30% are commonplace in their claims, but we're not going to give them too much prominence as the devil is all too often in the detail when it comes to teasing out the factors behind performance differentials. Suffice it to say that if you have any interest in Alder Lake as a platform, keep an eye open for independent reviews at launch from your preferred publication.

The Intel 12th Generation Core Desktop Processors are being unveiled today as six unlocked SKUs representing three performance classes. That being said, other SKUs for mobile and desktop are anticipated in the near future; this is just where Intel has chosen to focus their marketing at the current time (not coincidentally, it's also where they're under most threat from AMD). 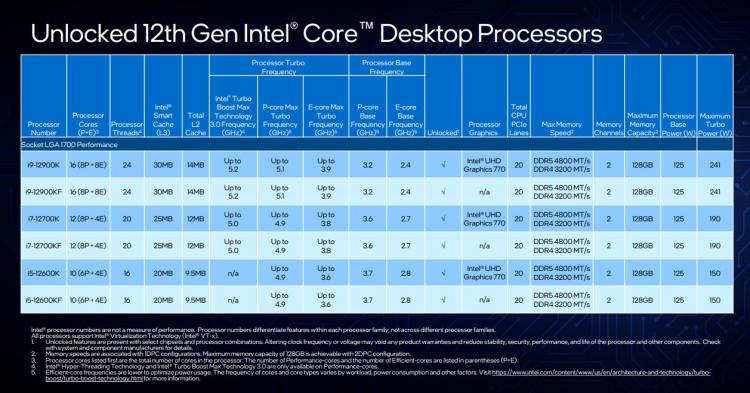 Two aspects remain to be discussed at the time of writing. 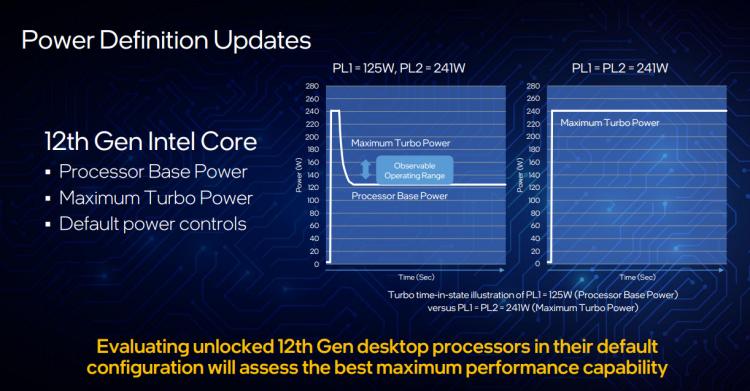 The first, and less important of the two, is TDP; we'll know more about the power requirements of the processors at launch but the dual 8-pin CPU power connectors present on a lot of Z690 motherboards indicated that this processor could guzzle down the watts in order to maintain high performance over extended periods. PL-State slides use figures up to 241W for the highest state in stock configurations, but it's not clear how extended the operating periods at PL2 will be in the default configuration.

The second is price, and not just of the CPUs themselves. Innovative new technologies always have an early-adopter rider attached to them, and Alder Lake has more than one or two. DDR5 pricing might turn out to be a shock to the system, and Z-series motherboards are rarely a cheap option. Given the current inflated price of GPUs, there could be a massive barrier to entry into for this platform in the consumer space.

Stick around for the answers to those questions, and more, over the course of the next week.

There are currently 662 user(s) online:
Google