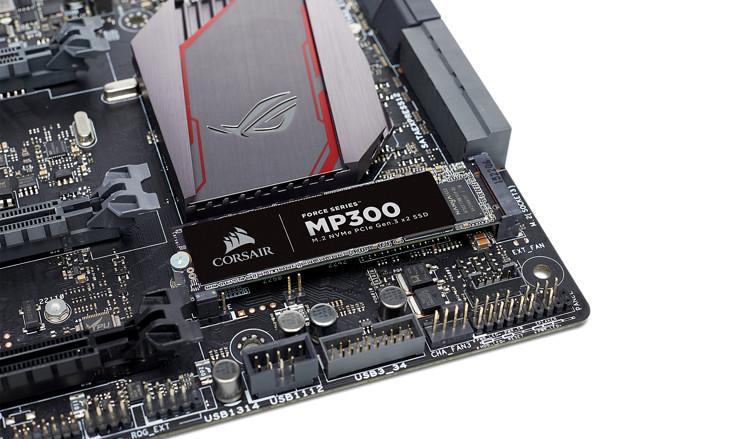 Peripheral, case and component manufacturer Corsair has had a lot to reveal at this years' Computex trade faire. However some of the announcements have managed to stay relatively under the radar thus far (perhaps because they didn't have RGB lighting), one of which was the reveal of new affordable M.2 SSDs known as the Force Series MP300 range.

The Force MP500 SSD range was released in early 2017 (you can check out our review here), and it was one of the first round of next-generation NVMe SSDs to test the M.2 Gen2 PCIe x4 interface's limits. Since then the middle-ground between these monumental heights (3GB/s Read, 2.3GB/s Write etc.) and SATA SSD speeds (550MB/s read/write) hasn't really been exploited by new and yet less expensive M.2 NVMe models.

Corsair's Force MP300 SSDs aim to change that. The new series is one of very few from the big consumer names to directly address the needs of a more affordable market, offering a range of capacities and speeds substantially above SATA in the compact M.2 form factor. The M.2 slot has now been ubiquitous on motherboards for the past few generations, and is also present on many mainstream notebooks, all of which may fall below the 'Prosumer' and 'Enthusiast' bands. 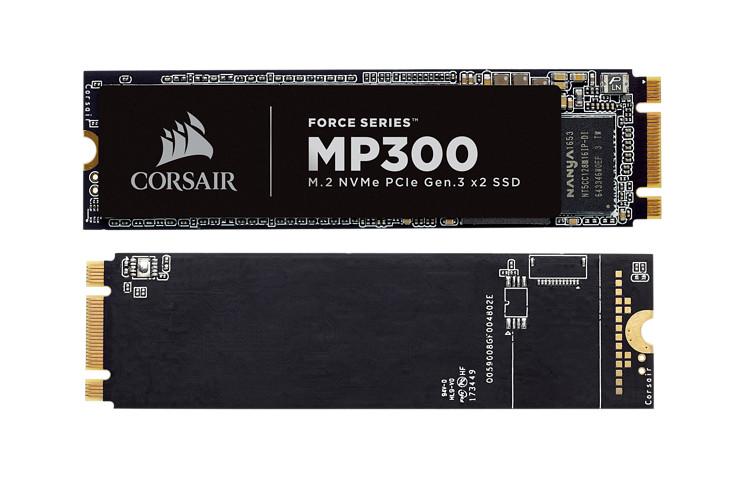 Like the MP500-series, the MP300-series will be available in 120GB, 240GB, 480GB and 960GB capacities. However unlike the MP500-series it is priced from $49.99 (MSRP) for the 120GB model, a size that's ample for Windows OS, Office and more applications besides. Not only does this mean that exploiting the M.2 slot on most new motherboards is easier, it also unlocks the door to cheap yet sleek systems requiring neither 2.5" nor 3.5" drives.

The trade off is one of performance. Speeds to expect from the MP300-series are reminiscent of (but perhaps a little better than) the first generation NVMe SSDs, and as is often the case write performance falls off as capacity reduces. The drive is limited to two PCI-Express lanes rather than four on the MP500, effectively halving the maximum potential bandwidth. As a consequence the top-end 960GB model offers up to 1,600MB/s sequential read and 1,080MB/s sequential write. IOPS are still excellent however, hitting 240K IOPS Random Read and 210K IOPS Random Write.

While the MP300 series will offer a fair leg up over SATA SSDs in terms of performance, the real boost is versus older mechanical drives. System boot times, application load times, and overall system responsiveness are all massively improved compared with using a mechanical drive alone, and the M.2 drive slot doesn't require routing of cables for power and data. As an in-place hardware upgrade it doesn't get much easier, although to get the most out of it you'll want to move your OS installation and Office apps. to the new drive.

The Force MP300 SSDs should be available worldwide in the very near future.