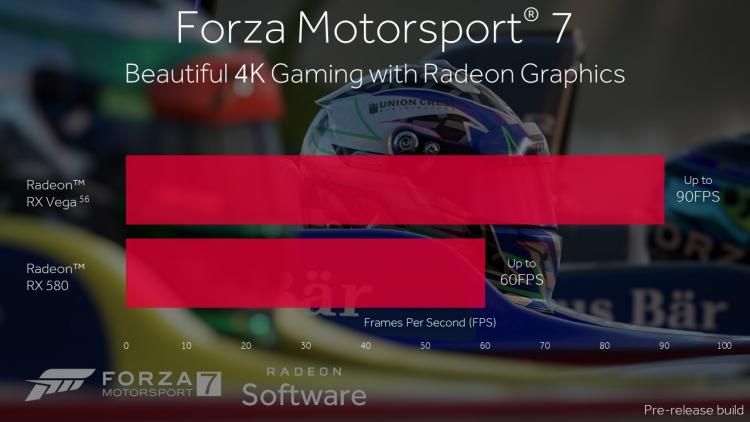 It appears that AMD's heavy investment in all things DirectX 12 is beginning to pay off in the form of very real performance leads in a brand new title, that being Forza 7. The new driving sim, developed by Team 10 and published by Microsoft, was released today but benchmarked late last week by Computerbase.de, and it showed some intriguing results that AMD themselves are now eager to amplify.

An AMD blog post on the subject highlights excellent 4K performance for their Vega architecture, offering 'up to' 90fps, but that's perhaps a little disingenuous because of that qualifier. Significantly more noteworthy is Computerbase's result of ~73 average fps, and even better 70.9 fps 99th percentile figure (indicating excellent stability) for the Vega56. Even the RX 580 - the current top-end Polaris GPU - was capable of 4K at a playable ~40fps in terms of both averages and 99th percentiles.

However, it's also eye-opening that AMD's GPUs fairly trounced their NVIDIA counterparts in the same price bracket at 4K, with the Vega56 even surpassing the GTX 1080Ti in 99th percentile frame times at 4K. That speaks volumes.

Even lower-end Polaris cards are doing well with this new title, with AMD boasting 'Crisp 1080p gameplay' for the RX 570 & 560. But once again it's the 99th percentile figures that AMD could be focussing on, indicating much less variance in their frame rates than the competition even on Polaris. 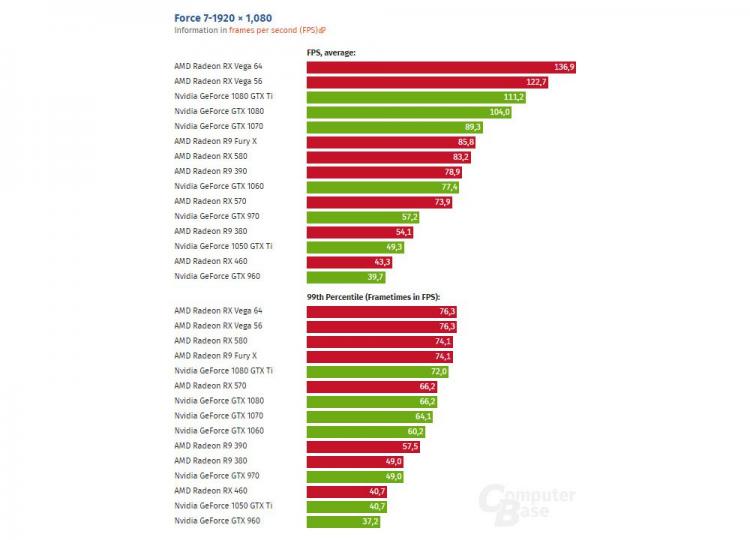 AMD's figures are based on their own internal testing with the Crimson ReLive Edition 17.9.3 drivers and a pre-release build of the game, but they line up with 3rd party conclusions.

It's not clear exactly why AMD does so well. In general Polaris and Vega have been perceived to have particularly strong DirectX 12 optimisations, and have solid results using a range of low-level APIs including Vulkan, but at least some credit is being placed on the new driver. If that's the case hopefully that secret sauce can be liberally poured over more DirectX 12 games currently in the pipeline.

One further noteworthy conclusion was made in Computerbase's testing - 4K absolutely demands more than 4GB of VRAM. Despite a solidly-quick GPU, the Fury X absolutely bombed in 4K specifically, clearly limited by its 4GB frame buffer and badly trailing the 8GB RX 580.

Forza 7 was released earlier today, and is available on PC through the Windows 10 store.