FTL Neutrinos Not So Zippy After All?

One of the most widely reported stories of 2011 in the realm of physics was the perplexing case of neutrinos appearing to travel faster than light, results which raised significant questions about the theoretical bedrock of modern-day physics. The data, compiled and published in September by scientists working for the CERN physics lab, concerned the speed at which emitted neutrinos travelled between Geneva, Switzerland and Gran Sasso, Italy; neutrinos were observed to be traversing the distance between the two points approximately 60 nanoseconds faster than light would.

Antonio Ereditato, author of the paper and member of the OPERA team which performed the investigation, was understandably cautious. The results were statistically significant - sufficient data was collected that the team could be confident that the results could not have occurred by chance - but the scientific importance meant that although they could not explain the results it behoved the wider scientific community to check for errors in equipment and methodology.

The paper and subsequent press conference had the aim of challenging science to do what it does best: investigate a hypothesis to such an extent that either it cannot withstand scrutiny or represents evidence which is undeniable.

"Despite the large [statistical] significance of this measurement that you have seen and the stability of the analysis, since it has a potentially great impact on physics, this motivates the continuation of our studies in order to find still-unknown systematic effects. [..] We look forward to independent measurement from other experiments." 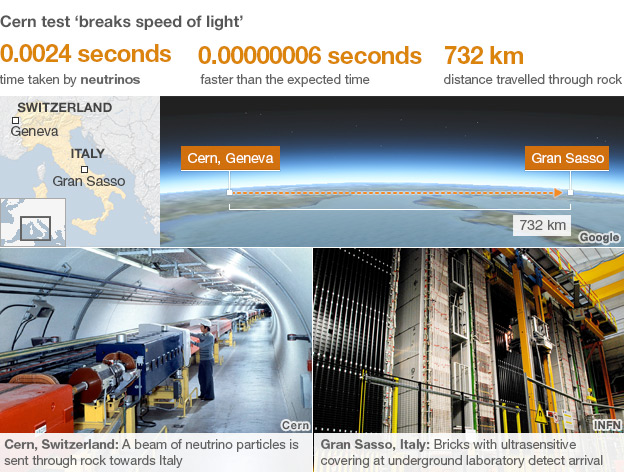 This week it was announced that a possible cause of the unexpected results may have been found. Having focused on the experiment calibration and measurement hardware, OPERA themselves believe they may have discovered two systemic errors which could throw off the data being collected; however somewhat inconveniently they would serve to bias the result in opposite directions.

The first error, which was probably lead to a number of red faces in the team, was simply a loose cable connection between the GPS signal and the experiment's main clock. This, say the team, would make the neutrinos appear to be travelling faster than they were and would directly explain the faster than light results gathered last year. Whilst at first glance this may seem like something of a 'schoolboy' mistake, it's difficult to impress just how complicated the hardware is and how easy such a fault could be to overlook.

On the other hand the second potential source of error is the "oscillator", the function of which is to provide a calibrated clock signal in between GPS synchronisation events. OPERA believe that this may cause the neutrino's to appear slower than they were travelling, counteracting the effect of the first error. The magnitude of each respective error isn't yet fully known, but it's conceivable that the neutrino's were travelling even faster than first thought.

The combined impact of the two errors could be significant, we'll only find out how significant when the tests are re-run later this year. In the mean time OPERA will continue to investigate their experimental procedures to weed out any further problems. The story of whether or not neutrinos can travel faster than light hasn't yet been settled, and there may be more perplexing outcomes to unravel in the future.

« MSI Confirm Support For Intel's Next-Gen 22nm Processors · FTL Neutrinos Not So Zippy After All? · Rumours Of As Yet Unannounced Blizzard Freemium Title »