FUZE Technologies are certainly an interesting venture. In 2013 they were launched with the goal of increasing the accessibility and ease with which everyone can learn how to code. Inspiration for the first round of products was clear - the Acorn BBC Micro, staple of 1980's UK classrooms and the first taste of computing and electronics for many of today's most talented software developers and scientist. Creating a marketable product is far from a trivial matter.

FUZE's approach was threefold. The first and most obvious is the creation of a hardware platform, and here they took advantage of the then-new Raspberry Pi as an small and most importantly affordable central component for the system known as a Single Board Computer (SBC). The Raspberry Pi integrates CPU, graphics memory and local IO into one very small board as a barebones product.

Next up is a software development environment, which FUZE implemented as FUZE Studio. The Studio has a programming tool known as FUZE Basic, a procedural programming language similar to Pascal. It acts as a much-needed half-way house between Scratch (an open environment for very simple programming using visual blocks in a workflow model) and far more advanced languages such as Python and C++, and is intended to be easy for even novice programmers to pick up an play with. This year FUZE Studio was also announced for the Nintendo Switch, coming Q1 2018. 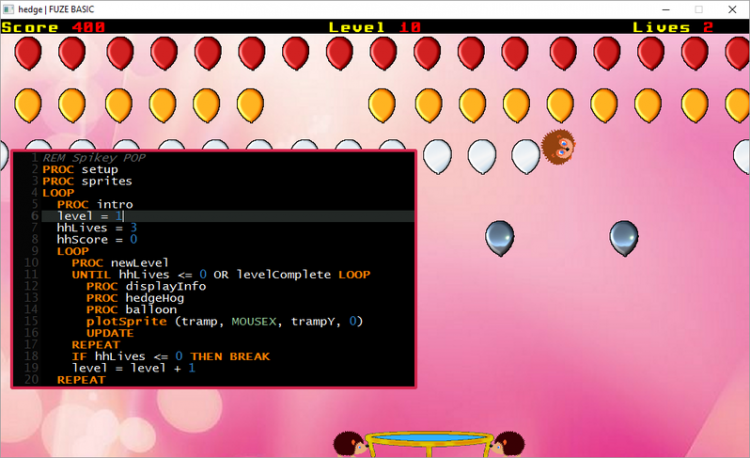 Start with "Hello World", move on to writing games, all with FUZE Studio

Finally, there's the FUZE IO Board, and this is where it gets really interesting. In this burgeoning era of programmable electronics, schools and colleges needed some way of evolving simple programs into more complex projects with real-world applications. The FUZE IO Board, along with the Breadboard, allows users to wire up general purpose components and then reference and control them through FUZE Basic. Nifty stuff.

Today FUZE Technologies have announced a new collaboration with ASUSTeK, broadly updating their FUZE Workstation to a new hardware specification. Two new models of the Workstation will incorporate the ASUS Tinker Board SBC, an upgrade which should substantially increase the performance potential of these units and allow students to really stretch their programming muscles with more complex projects.

The FUZE-TB-D is the basic model, priced at £149.99. ASUS Tinker Board, FUZE IO Board, 16GB boot SD card and solderless electronics breadboard are all housed within the FUZE Special Edition case and keyboard, looking quite a bit like that classic BBC Micro. Also included is both a reference guide and worksheets to get users started on some FUZE Basic projects.

In contrast, the FUZE-TB-R has all the features of the FUZE-TB-D but also includes a robotic arm kit (shown assembled above), which is controllable via FUZE Studio and in FUZE Basic. It is priced at £249.99 inc. V.A.T.

As well as the new product models, FUZE Workshop models in use at STEM events and schools will also be updated to incorporate the ASUS Tinker Board design, reflecting this new broad partnership.

More information on FUZE Technologies and the Fuze Workstation can be found at FUZE.co.uk.