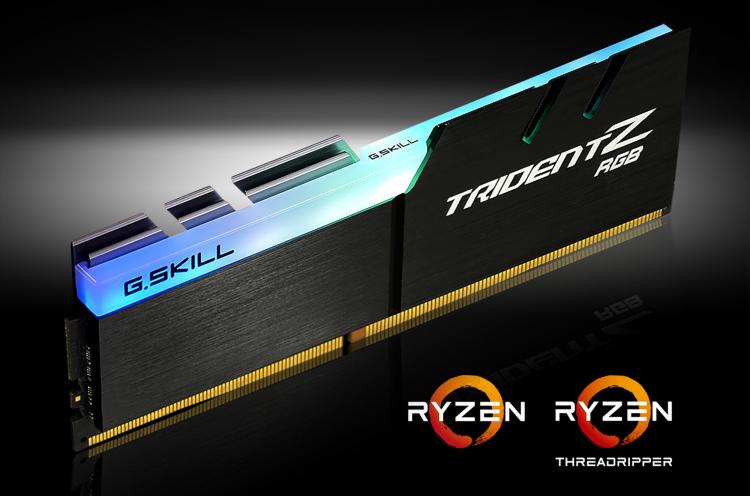 AMD Ryzen and Ryzen Threadripper users will rejoice with G.SKILLs latest product release. Compatibility issues with DDR4 memory on the latest AMD platforms will be over as more and more brands release certified DDR4 kits for the AM4 and TR4 AMD platforms and joining these brands today is G.SKILL. G.SKILL introduces Trident Z DDR4 memory kits featuring enhanced compatibility with AMD Ryzen and Ryzen Threadripper platforms. The kits include speeds of up to DDR4-3200MHz and kits of up to 128GB (8x16GB) of up to 2933MHz for AMDs HEDT TR4 platform. For a full range of memory kit capacity options, the new Trident Z RGB memory kit models are available at DDR4-2400MHz in 2-, 4-, and 8-module kit configurations with 8GB and 16GB modules, which allows for 16GB, 32GB, 64GB, or 128GB memory kits for your AMD system.

AMD currently has two platform offerings, where Ryzen supports dual-channel with 2 or 4 memory modules and Threadripper supports quad-channel memory with 4 or 8 memory modules. To give a boost in memory performance to AMD number-crunching workstations and high-end graphic rendering systems, G.SKILL offers several selections for each AMD platform, including memory speeds of up to DDR4-2933MHz or ultra-high capacity at 128GB (8x16GB). For details on specifications and compatibility support of the new Trident Z RGB kits, please refer to the following table:

To differentiate between the new AMD-optimized Trident Z RGB kits from the original, look for the "X" at the end of the Trident Z RGB model numbers. Please refer to the following chart, which shows the difference in the model number:

There are currently 568 user(s) online:
Google