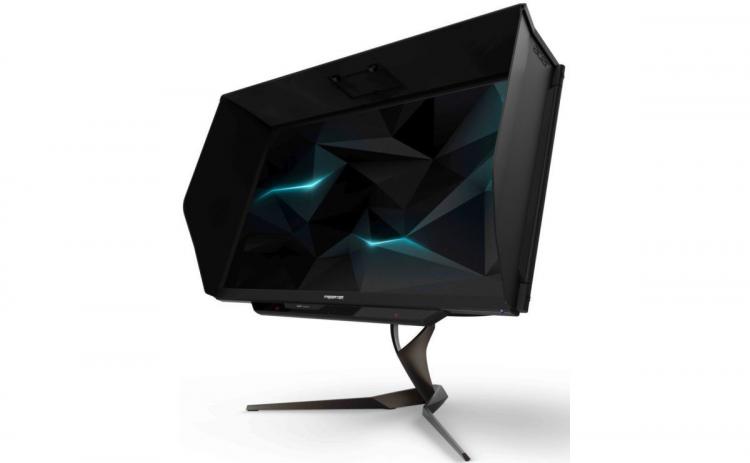 True High Dynamic Range monitors, augmented by NVIDIA's G-Sync or AMD's FreeSync technology, have been on not too distant horizon ever since CES 2017; however thus far there has been little indication of exactly when consumers can expect them. Last month Philips MMD revealed a 4K HDR1000 panel that's FreeSync 2 compatible, and that was preceded by a similar announcement from AOC, but even less is known about general availability for G-Sync compatible HDR monitors. Nonetheless this week PCWorld released a video which has the potential to stand the market on its head, indicating that G-Sync HDR gaming panels could be available even before Computex in June.

PCWorld Executive Editor Gordon Mah Ung has had a hands-on with Acer's Predator X27, a new flagship model in their gaming monitor lineup with awe-inspiring specifications. Just being a 4K panel running at 120Hz (144HZ OC) with G-Sync would place it in the upper echelons of performance hardware, but the fact that it supports HDR1000 (and by extension G-Sync HDR) really makes it stand out amongst even the rarefied company of G-Sync monitors.

Even a quick glance through the pre-launch specs should elicit a certain amount of awe. HDR brings with it brighter whites and darker blacks, facilitated in part by the panel's 384 dynamic backlight zones. A maximum brightness of 1000 nits (hence HDR1000) means that the panel has a quoted contrast ratio of 50000:1. The fact that the new Predator X27 can make even a high spec Predator XB271HK look ordinary by comparison should give anyone pause for thought.

But it's Gordon's closing comments that are the most promising. He states that both this and a similar model from Asus (who manufacture the ROG Strix range of monitors) could launch in as little as two weeks from now. That's ahead of Computex, which is when you might otherwise expect big brands to unveil eye-catching new product lineups.

Unfortunately, there's also the awkward question of price, and it should digested ahead of time that these monitors will not come cheap. Currently 4K 144Hz panels with G-Sync or Free-Sync command an understandable premium, and you can expect HDR variants to push way beyond that rather than displacing them at the same price point. A recent article at The Tech Report highlighted pre-launch price tags at European retailers which placed these monitors in the 2.5-3K (inc. V.A.T.) range. Still, if you're expecting to play games at 4k and 144fps, you've probably invested not inconsiderable sums in your PC already.

There are currently 370 user(s) online:
Google