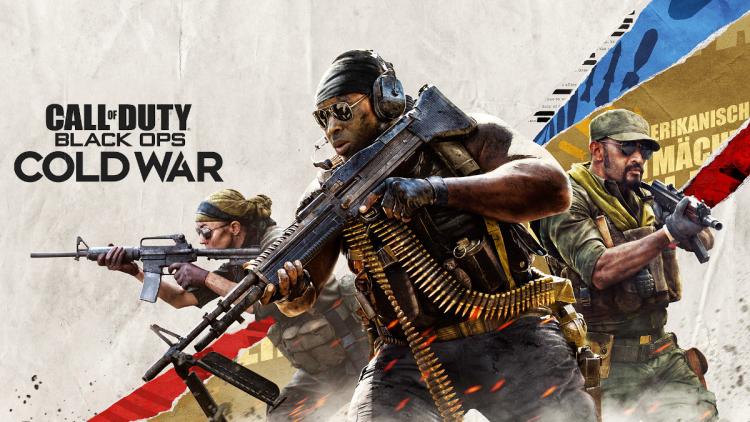 Activision's Call of Duty franchise returns this autumn with Black Ops Cold War, a title set in the tense geopolitical climate of the early 1980's. This AAA first-person shooter will stretch many a system's graphical horsepower, and to aid in a smooth launch NVIDIA have prepared a new GeForce driver in advance of the PC Beta next week.

The GeForce 456.71 Game Ready driver for RTX 30-series and earlier graphics hardware is primarily intended to serve as an initial stable release for the CoD: Black Ops Cold War PC Beta, offering the developers of both game and driver stack an opportunity to further tune the driver and game engine before its full launch on November 13th.

Part of that tuning process is the integration of NVIDIA Reflex into the game. As we've covered, Reflex is a set of proprietary techniques that are designed to minimise 'click to screen' latency, making a given title more responsive to user inputs. It has already been rolled into Call of Duty: Warzone and will be implemented in still more competitive games over time.

Reflex is supported by GPUs as far back as the GTX 900-series, but is further enhanced by aspects of the RTX 30-series hardware and the latest range of 360Hz G-SYNC monitors. Additional optimisation recommendations that reduce system latency are available here.

It wouldn't be a driver update without fixes to known issues, and the 456.71 Game Ready drivers list just a few highlighted ones. The most critical, perhaps, is a fix to ray-traced shadow rendering problems in Fortnite on some notebook configurations. The open issues list is far more populated, with a dozen important items identified as needing attention in the near future. Read the release note summary below for more.

The GeForce 456.71 Game Ready driver is available for 64-bit versions of Windows 7 through 10, and compatible with GPUs as far back as the GTX 600-series (Kepler). It also incorporates the RTX 3080 stability improvements that were part of the previous driver release. Download them through the NVIDIA Driver Finder or via the GeForce Experience desktop app.

The Call of Duty: Black Ops Cold War PC Beta is due to go live on October 15th.

This section provides highlights of version 456.71 WHQL of the NVIDIA Release 455 Driver for Windows 7, Windows 8, Windows 8.1, and Windows 10

Changes and Fixed Issues in Version 456.71

As with every released driver, version 456.71 WHQL of the Release 455 driver has open issues and enhancement requests associated with it. This section includes lists of issues that are either not fixed or not implemented in this version. Some problems listed may not have been thoroughly investigated and, in fact, may not be NVIDIA issues. Others may have workaround solutions.

[Notebook][H-Clone]: With the integrated graphics processor as the clone source, display settings cannot be changed from the NVIDIA Control Panel. [200594188]

[World of Warcraft Shadowlands]: When run at frame rates greater than 60 FPS with high display settings, moving characters display minute twitching/stuttering. [200647563]
[Sunset Overdrive]: The game may display random green corruption if Depth of Field is enabled from in-game settings. [2750770]
[Call of Duty - Warzone]: Freestyle does not work. (200593020)
[Forza Motorsport 7]: The curb may display a black strip during a race on certain tracks. [2781776]
[Fortnite]: Blue-screen crash occurs pointing to nvlddmkm.sys when playing the game at 4K resolution. [200645328]
- To work around, set the resolution to lower than 4k0.
[Zombie Army: Dead War 4][Ansel/Freestyle]: The Ansel & Freestyle tabs are unselectable. [2810884]
[YouTube]: Video playback stutters while scrolling down the YouTube page. [3129705]
[G-SYNC]: With G-SYNC enabled on some Freesync displays, half of the screen goes black. [3133895]
[GeForce RTX 3080/3090]: Samsung G9 49 display goes black at 240 Hz. [3129363]
[Notebook][H-Clone]: With the integrated graphics processor as the clone source, display settings cannot be changed from the NVIDIA Control Panel. [200594188]
[Notebook]: Some Pascal-based notebooks w/ high refresh rate displays may randomly drop to 60Hz during gameplay. [3009452]